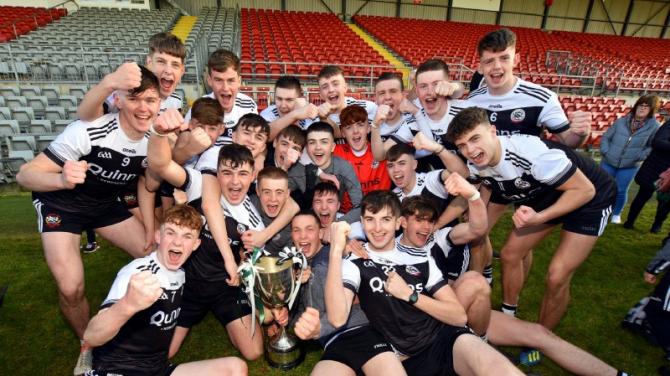 KILCOO achieved their third Down Minor Championship title this decade on Sunday with a six point victory over Burren and in doing so made it a clean sweep of championships for their club.

This year will go down as an outstanding and unprecedented year for the Magpies, this latest success ensuring the double for their Minors, Premier Reserves and Seniors. Add to that two Down Ladies Championships, an Ulster Senior League and Minor and Senior Feis Sevens titles, their achievements can only be admired.

The Minor Final replay was played in Pairc Esler on Sunday and the first half ebbed and flowed with scores at a premium. Both teams defended well early on and there was little to separate the sides, the half-time score reading 0-4 apiece, with the swirling wind having an impact on proceedings.

Kilcoo would have been disappointed going in at the break having been denied what looked like a penalty before half-time but they channelled that well early in the second-half and scored three points without reply, two from captain Shealan Johnston. Burren, to their credit, stayed in touch, but as the half progressed Kilcoo gained complete control of possession with Anthony Morgan, Tiernan Fettes and Rowan Tumelty outstanding at the back.

With ten minutes to go senior player Morgan drove through the middle from centre-half back to bury into the net to effectively end the Burren challenge. The Magpies kept the scoreboard ticking over until the full time whistle and deservedly lifted the Collie Curran Cup against a Burren side who gave it everything.