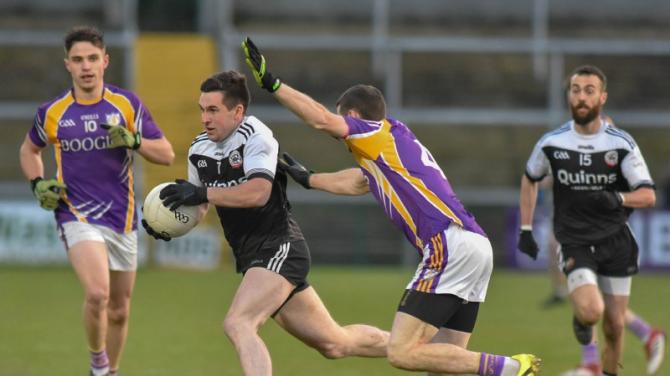 KILCOO have another chance to get their hands on the elusive Ulster Senior Club Championship trophy having secured their place in their third final over this last eight years.

Played in Armagh's Athletic Grounds on Sunday, it was a tense and at times thrilling contest and the Magpies displayed enough craft and just enough ingenuity to get over the line.

The Down champions face Donegal's Glenties in the final on Sunday, December 1, and Kilcoo selector Conleith Gilligan insists they will need to improve on the win over Derrygonnelly.

“Absolutely, that performance today would be absolutely nowhere near good enough, we know that,” said Gilligan.

“But all these games, it’s just being the best team on the day. It doesn’t matter how you play as long as you get there. Today we just needed to be better and we were, and we’re very thankful for that.

“The way we expected Derrygonnelly to go, we knew it was going to be that kind of game. We just knew we had to grind it out and be there at the end, the semi-final was just one we had to take and thankfully towards the end we held on.”

Aaron Branagan's goal on 38 minutes was the deciding factor, set up by the intelligent Conor Laverty whose quick free sent Anthony Morgan on his way towards goal, before the wing-back release possession to the overlapping Aaron Branagan, who coolly finished inside the near post for a cracking goal.

It was a timely goal too because Derrygonnelly were only starting to find their feet and gain some traction when the Magpies struck with that body blow.

And the Kilcoo selector was pleased with the goal.

“Yeah, it was. We’ve had games that were very much in the mix and we’ve got the goal at the right time to be able to push on,” said Gilligan.

“It came today and it looked when we went four up that we’d be in control, but we didn’t kick on and it allowed Derrygonnelly back in.

“To be fair, as they had in a lot of games, we knew they would be strong towards the end. They’ve done that today again.”

Kilcoo don't blow teams out of the water, even though they have the personnel to do so, and again on Sunday they kept things tight and cagey, which was a risky enough tactic given how Derrygonnelly kicked 12 wides, some shocking.

The Fermanagh side took the early lead with points from Garvan McGinley and Kevin Cassidy and they would have bagged a goal but Kilcoo keeper Martin McCourt, who actually started the season playing for the Thirds team, made a brilliant dive to his right to deny Stephen Gullion a goal.

Kilcoo eased their way into the game with young Ryan McEvoy chipping over a free, Aaron Morgan kicking over and Paul Devlin's converted free gave the Magpies the lead on 14 minutes and they didn't fall behind again.

It was hard but fair hitting and captain Conor Laverty couldn't buy a free as he seemed to be targeted but there weren't too many cheap frees awarded to anyone by Crossmaglen referee Paudi Hughes.

Both sides left their shooting boots at home, as between them they kicked over eight wides before thankfully Jerome Johnston looked up and stroke over a beauty from 45 metres to give Kilcoo a 0-04 to 0-02 lead at the break.

Derrygonnelly huffed and puffed at the restart without making much of an impressions Kilcoo's defence was resolute with captain Aidan Branagan, Niall Branagan and Niall McEvoy hunting in packs, with Ryan Johnston, Ryan McEvoy and Paul Devlin helping out at times.

Kilcoo had numbers back and while Derrygonnelly's shooting wasn't so hot, much of that can go down to the excellent defending from the Magpies, which pleased the selector.

“Derrygonnelly are very different from a lot of teams in that they pose a huge challenge physically. They’re physically a lot bigger than us all over the pitch, so you’re having to plan for high balls and them breaking lines,” Gilligan said.

“We did that well in patches today, and it was enough for today.”

Devlin kicked over his second converted free to stretch their lead before the Fermanagh men enjoyed a purple patch. Two points in as many minutes from Garvan Jones left a point between the teams and then Ryan Jones followed up with a tight angled converted free to level the scores.

All of a sudden Derrygonnelly were back in the game and getting on top but just as quickly came Aaron Branagan's stunning goal and all that positive energy was sucked out of the Fermanagh men.

McEvoy's second converted free put four points between the teams with 15 minutes to play and there were no signs that Kilcoo were looking to stretch that lead. As expected Derrygonnelly came at the Magpies, Stephen Gullion pointed.

Then came two red cards in the 23rd minute as Derrygonnelly's Lee Jones and Kilcoo's Jerome Johnston both picked up second yellow cards, for silly challenges, to reduce both teams to 14 men.

The hard grafting energetic Eugene Branagan restored the gap to two four points but Derrygonnelly slowly ate into the lead and in the fifth minute of additional time corner-back Jack Love floated over a score to leave only a point between the teams.

But Kilcoo made sure of the win when substitute Shealan Johnston threaded a pass to older brother Ryan and he cut in on goal before opting to fist over the bar.

The result was in the bag and it is a great achievement for the club and the team to be in another Ulster Championship Final.

Kilcoo's record in Down alone will probably make them favourites, although team selector Gilligan doesn't care who is favourites or underdogs.

“I don’t know, that’s for somebody else to decide,” Gilligan said.

“We’ve took it a game at a time, that’s all we’ve done. It was getting the Down Championship back for them and then taking Magherafelt, then Derrygonnelly. It will be no different the next day and if that’s good enough, great.”