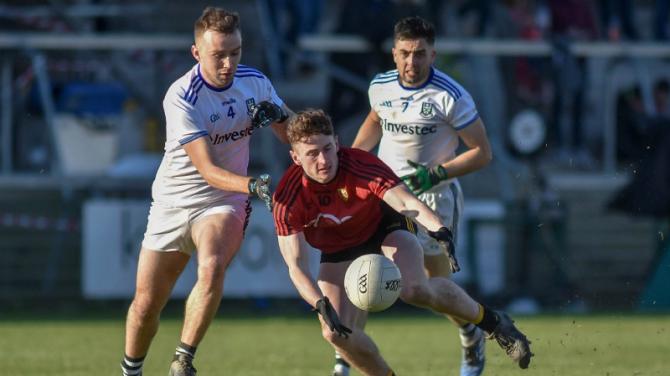 It was a step too far for Glenn in what has been an incredible journey for manager Tony Bagnall and his team this season.

Magheracloone were a different gravy to what the Down Intermediate Champions had faced anytime this year and possessed too much class and nothing seemed to go right for Glenn.

Mattie Bagnall was thrown on in the hope of grabbing much needed scores but he lasted only four minutes due to his hamstring problems.

But you couldn't fault the battling character of this Glenn team because potentially they could have been blown out of the water but the Down representatives, wearing the Down colours, didn't allow that to happen.

They were applauded off the pitch by large Glenn support and while no-one wants to be gallant in defeat, these Glenn players can walk tall.

“We set out this season to win an Intermediate Championship and we did that. We got our win in Ulster, which will stand to the lads in future years and hopefully they’ll want to get back to that. As I say, we won’t define our season today.

“We’re happy with how we’ve done. Yes, we’re disappointed, but if you had told me last January after the three boys went to Australia, that we’d be playing in the semi-final of Ulster, I would have told you to get the men in the white coats to come and take you away.

“But the young lads have really stepped up and I can’t speak highly enough of them.

“As a Glenn supporter, I’m proud of them. I’m still proud today.

“We didn’t play well and yes, we made a lot of mistakes, but at least we kept going because, at one stage, the floodgates could have opened and we could have been looking at a 15 or 20-point hiding. But we did rightly and kept the score to six, so fair play to them.”

Played in Armagh's Athletic Grounds it was all Magheracloone early on as they stormed into a six point lead before Glenn got off the mark.

Magheracloone's full-forward Michael Metzger was outstanding and he kicked seven fantastic points from play, while Tommy Freeman was also dangerous.

The full-forward struck the first three points and the fifth with Killian Ruddy and Alan McCahey the others, but before Glenn scored, corner-back Gavin McParland, who was outstanding, cleared the ball off his own goal-line to deny the Monaghan men a goal.

Jack McCartan eventually got Glenn off the mark on 21 minutes. Magheracloone had their homework done and they double-teamed on McCartan with captain Peter Ward shadowing his every move and brother James helping out for when the strong forward got past him.

Young Cian Lyon's fired over another point from distance and Joe Sands tagged on a 14-metre converted free but by trailing 0-03 to 0-08 at the break they had left a lot to do, while at the same time did well to stay in the contest.

Glenn tried everything, the long balls into the forward line, running at them, shooting from distance but nothing seemed to work. Dylan Bagnall, Jack McCartan, young Patrick Brooks, Jarlath McConaghy and Cormac Clarke were some of the players who ran themselves into the ground.

“Our injuries probably caught up with us today too, with Mattie out, Conor [Cranny] out, Stevie [Clarke] out,” said manager Bagnall.

“We just haven’t got that wee bit of quality that they had. Tommy Freeman is a class act, he’s a former All-Star and obviously still has it. He knows how to make that yard of space and he knows where the goals are to put the ball over the bar. The big 14 [Metzger] was excellent and the number nine was out of this world, a real, real class act.

“They were a step up from what we’ve played before this year and are a big, strong, physical team. They were in a Senior Championship final two years ago and you can’t buy that experience.

“We made mistakes today in the first half and nerves probably got to the lads. “Our passing wasn’t good and maybe if we had out a few passes together in the first half, we maybe could have done something. But we can have no complaints. The better team won on the day, simple as that.”

It is been a fantastic year for Glenn, especially given how they lost three county players to immigration. They have brought so many young players into the first team and the experience should stand to them over the coming years.