Tally is making progress in Down 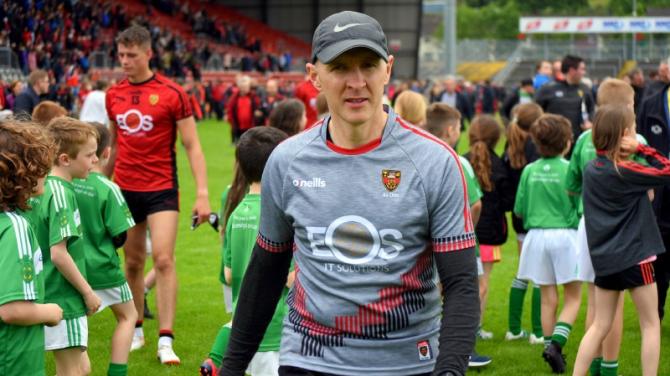 DOWN manager Paddy Tally has seen a big difference in his players since taking over the reigns from the late Eamon Burns.

Tally is entering his second season and having largely rebuilt a squad last season he has been impressed with how his players performed in the club championships and their attitude in training.

Tally was at the Dr McKenna Cup launch in Belfast last week where he said he is yet to finalise his squad and admitted he is disappointed not to see the Colleges included.

“We have been back training this couple of weeks and we brought in a lot of new players to the squad and a lot from U20 squad of last year, which is a policy, last year we brought in eight or nine and we have done the same again,” said Tally

“We have brought in a few players that have performed well in the club championships and club league matches, so that will be an on-going process until the end if the month and by that stage we will be looking towards the squad for the McKenna Cup.

“The competition is good because it is games, it was great for the colleges for the Sigerson's and it is shame they can't compete this year, due to change in calender, because I thought the colleges added to the McKenna Cup.

“No disrespect but it wasn't a big competition until the colleges came into it and they got group games going and got people out watching football. It would have been knockout before that and played off without many people knowing about it. But a lot of that goes down to how the Ulster Council and the GAA go about promoting the competition, certainly from a county point of view, having the minimum of two games in late December and early January is really important in preparation for the start of the National League.”

Players such as Donal O'Hare, Jerome Johnston, Ryan McAleenan, James Guinness and Down captain Darren O'Hagan all excelled for their clubs in this year's senior club championship, which is crucial according to the Down boss, but he also feels that big games experience in last year's championship has seen a positive mindset change as well a physical appearance.

“Something I am very clear about, we expect our county players to perform well with their clubs,” Tally said.

“Some of the younger players, particularly the Carryduff lads, they got their team promoted to Division One, the Warrenpoint lads did really well and we have a few more them in among us and we are looking forward to working with them and obviously the Kilcoo players did well.

“Generally across the board we are happy with the club performances of or players but that is something we expect, we expect nothing less.”

Players at club and county level are getting stronger in mind and body and Down know they have tough tests ahead. McKenna Cup opponents Fermanagh are a Division Two side and were only a kick of the ball away of being promoted to the top flight while Antrim will be pushing to get out of Division Four. Down need to be ready for the rigours of December and January football, which isn't always the prettiest and can be taxing on the players, but Tally has been impressed with how his players have grown over his first year in charge.

“I can see a difference in the players in just over the 12 months,” said Tally.

“I can see a difference in the physic of the players and with another year of conditioning in the younger players, they are coming on and you can see change in attitude, they are more confident about themselves.

“They understand a lot more what it is like to play at this level, so I can see progress, it is evident about how they are going about their business but ultimately it comes down to winning games and that is where we will be judged.”