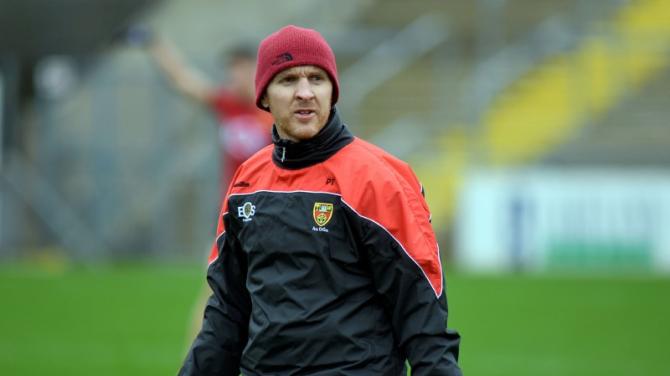 DOWN manager Paddy Tally pointed to black card to of Johnny Flynn as the beginning of the end of his side’s late rally.

Having surrendered a nine-point lead to defending McKenna Cup champions Tyrone at the half-time, the Mourne men had closed the gap to five points thanks no small part to Cory Quinn’s goal on 55 minutes.

Down had the upper hand and while the following three wides in a row were frustrating they still had momentum on their side.

However, Flynn’s black card under the new rules meant the subsequent ten minutes sin-bin left the Mourne men with only 14 players with only ten minutes of normal time remaining.

In that period Tyrone went from being four points ahead and having only scored once in the second half to firing in another 1-03.

“I’d like to have seen the last ten minutes 15 on 15, with a two or three-point game because the momentum was all with us at that stage.

“But really, we left ourselves with too much to do. If you play a first half like that, you’re leaving yourselves with a mountain to climb and against a very good team you’re not going to climb that mountain.”

Indeed Tally looked gutted at how his side failed to produce the goods in the first half. Sean Dornan, Conor Poland (2) and Pat Havern notched a paltry 0-04 to Tyrone’s 1-12 in the opening half played in Armagh’s Athletic Grounds on Sunday.

The Red Hands were 1-02 up before Dornan opened Down’s account. Conall McCann hit the net as early as the second minute and Darren McCurry continued were he left off on Wednesday night with a wonderful array of points.

Down’s attacks kept breaking down and Tyrone gobbled up possession as Down gave it away so readily, which disappointed the Mourne manager.

“I’m very disappointed with the first half,” Tally said.

“The start of the game, before we knew it, we were five or six points down and you’re always chasing the game after that.

“I think in the second half, we showed a bit of heart and a bit of spirit and there was a really good period for the first 20 to 25 minutes of the second half where we seemed to be in control. I think we scored six points without reply to get back into it and then we got a black card and went down to 14 men. It allowed Tyrone much more possession and then we missed crucial chances. When we were four down, we missed three or four crucial chances with the black card having a big impact in the latter stages of the game.

“We were very careless and I was very disappointed with our turnover count in the first half. That was the killer as Tyrone are a team that thrive on turnovers and we handed them the ball time and time again today.

“Their first two scores, they got 1-1 off us giving the ball to them and that just set the tone. We were playing into a low sun in the first half and that proved very difficult.

“Some of the boys were saying that they actually couldn’t see the men in front of them, but that’s just the luck of the draw. In saying that, some of it was very, very careless and it was disappointing.”

Tally made changes for the second half, on went Burren duo Donal O’Hare and the exciting Liam Kerr along with Carryduff’s Daniel Guinness and straight away Down looked a more dangerous animal.

O’Hare’s converted free got the ball rolling and points from Havern and Poland closed the gap before McCurry added Tyrone’s first point of the half.

Down were creating chances and captain Darren O’Hagan’s point left eight between the teams.

Then on 16 minutes Guinness sped forward before passing inside to young Kerr, with pace he shimmied through the Tyrone defence before squaring to Quinn, who cleverly allowed the ball to drop to his foot before deftly finishing into the net. It was a touch of class and Down’s tails were up.

But Kerr and Quinn missed three chances between them before that black card. Substitute Ross McGarry floated over a beauty to reduce the gap to four points but with a player extra Tyrone took over.

Ronan McHugh’s goal on 66 minutes ended Down’s hopes of a comeback, although young Kerr added to his tally.

As Down’s Dr McKenna Cup campaign they can look back at impressive wins over Ulster Championship opponents Fermanagh and Antrim, at midweek, and quite a number of players have given the Down boss something to think about ahead of the National League.

“A lot of new players got exposed to it and we’re still waiting on a number of players to come back from injury and we need to get more players back on the pitch again. But generally, it’s been a useful experience,” Tally said.

“It was great to get Donal [O’Hare] back playing again. He needed that bit of football and he’s got two weeks ahead of him to get ready for the league.

“Maybe this [the result] is a good thing, because we have a focus now. We can now switch to the National League. It’s going to be a big load over the next few weeks and we have boys still playing college football as well, so we’ve just got to be careful because we do still have a lot going on and we still have injured players coming back.”

Of course all eyes next week will be on the Club All-Ireland Final in Croke Park and the Down manager wishes the Magpies the best of luck and said he won’t be rushing any players into his squad.

“Kilcoo have their own thing at the minute and we’ll see how they go at the weekend,” Tally said.

“We wish them well and we hope they do well and then after that we’ll see where they are. Ultimately, they have a big, big weekend and how they come out of that and how they feel after that is crucial. It’s been a big push from them and we have to be careful too and make sure we give them that bit of space to concentrate on that.”