Tally's Down can see off Oak Leafers 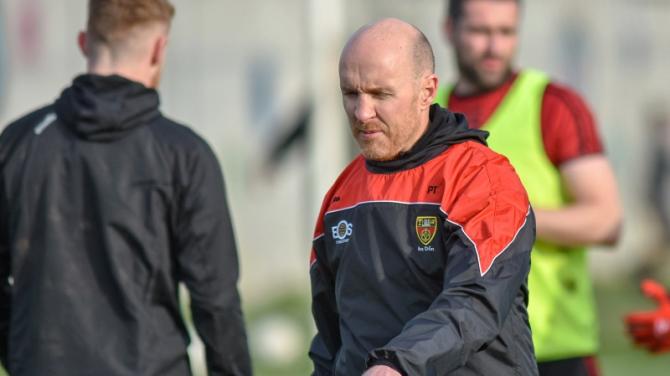 DOWN manager Paddy Tally hopes the home crowd at Pairc Esler will help his side grab their first win of the National League when they take on Ulster rivals Derry.

“It would be great but we’re going to have to improve,” Tally said.

“The only way we’re going to get a win [on Saturday] is if we improve on our play; the one thing that let us down today was our shooting, we created a lot of chances and we didn’t take them. That’s disappointing because we would back our players to be more efficient in front of goal, but we missed free kicks too and at crucial times in the match.

“We’ve lots to work on. If we want to beat Derry next week, we need a big improvement.

“The atmosphere’s brilliant in Pairc Esler on a Saturday night, so with a Derry-Down game, there’s a bit of history there over the years, I suspect a lot of Derry people might travel to that match as well. Looking forward to it.”

The Down boss wasn't getting too downbeat about the draw secured against an experienced Tipperary in Sunday's game at Clonmel and he expects another tough battle against the Oak Leafers.

“This time last year we had no points after the first match against Laois and we still went to the last game of the League where we still had a chance of promotion,” said Tally.

“It was important today that we came away with something, if we had come away without anything at all you’d have been really disappointed and then you question a lot of things.

“They showed a lot of spirit with ten to go, two points down and they still came back at it. That’s a good trait, something we’ve been building on.

“Next week is a whole new different game, Derry will come jubilant after coming back from being well down [against Leitrim]. This is going to be a very tight League, so I don’t expect much different next weekend. It’ll be another tight match.”

Derry will be coming to Newry with high hopes under new boss Rory Gallagher, but if Down can display a bit more composure in front of goal and get players such as Cory Quinn, Liam Kerr and Donal O'Hare on the ball then they can inflict damage on the scoreboard, especially in Pairc Esler.

With Kilcoo players expected to be given time to rest before committing to the county, the Down boss is hoping a few knocks and niggles heal on time.

Down face Derry in Newry's Pairc Esler on Saturday (February 1) at 7pm.