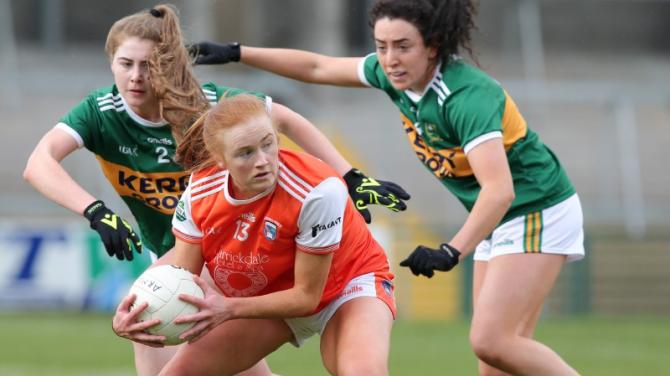 TWO late goals in the space of a minute weren’t quite enough for Armagh as the Orchard outfit fell just short of snatching a dramatic victory over Kerry in Sunday’s National League game in Tralee.

Ronan Murphy’s team trailed by seven points at the break after facing into the wind in the opening period but left themselves with a very tough uphill struggle by leaking a goal 39 seconds after the resumption.

Rather than closing the gap with the elements at their back, the orangewomen were outscored by their hosts for most of the second half and were eight down with 58 minutes on the clock.

But Blaithin Mackin hit the net to give Armagh fresh hope and when Aoife McCoy raised another green flag almost immediately, it was very much game on at Austin Stack Park though the sin-binning of Niamh Marley didn’t help the Orchard cause.

There were six minutes of injury-time but unfortunately Armagh couldn’t score again and had the long journey home in difficult conditions to reflect on what was, in the end, an agonising near miss.

A bad start to each half can be blamed for Armagh falling to a fifth consecutive defeat by Kerry, who had inflicted the Orchard’s only loss in last season’s seven league games and beat them again in the Division Two semi-final.

Although three-time All Star attacker Sarah Houlihan has since retired, Kerry can still call upon two high-profile forwards in Louise Ni Mhuircheartaigh and young Hannah O’Donoghue, who hurt Armagh as a rookie in the 2017 All Ireland quarter-final.

Last season’s skipper Amanda Brosnan has also called time on her Kingdom career with new captain Anna Galvin slotting into midfield alongside Lorraine Scanlon, while Aislinn Desmond is a formidable full back.

Relegated due to a perfect storm of factors in 2018, Kerry surprisingly lost last season’s second division decider against Waterford but would once again be seen as front-runners for the one promotion place available this time round.

Triple All Star Caroline O’Hanlon led the way with seven points for Armagh, five of them from frees, but Murphy’s side didn’t score enough for most of that second half as they struggled to reverse the damage done by the early goal never mind eat into Kerry’s interval lead.

Away to Kerry looked like Armagh’s most difficult fixture of the campaign so a two-point defeat, albeit the margin was wider for most of the afternoon, is still a respectable result.

However, the previous Sunday’s damaging defeat at home to Tyrone meant Armagh made the trip to Tralee knowing a win was needed to ensure that their promotion hopes would definitely remain in their own hands.

With the new straight final format introduced this season, a second loss in their first three NFL fixtures leaves Armagh effectively facing four cup ties between now and the end of next month.

They will be expected to triumph at lowly Wexford on Sunday week, their third away day in the first four fixtures, and at home to newly-promoted Meath on March 8 before finishing with Ulster derby battles against their provincial championship group rivals.

An away defeat to Kerry was probably budgeted for but, thanks to that costly loss to Tyrone, the Orchard crew will now have to win on the road against their former manager James Daly’s Cavan and then when Monaghan come to the Athletic Grounds.

Wexford, who have shipped 6-23 and 5-15 at home to Monaghan and Kerry respectively before last Sunday’s scheduled trip to Cavan fell foul of the weather, would appear ill-equipped to take Armagh’s scalp.

In advance, Division Two was seen as a battle between Kerry and the quartet of Ulster sides, but Meath have already upset Tyrone and Monaghan so the orangewomen will be wary when they come to town next month.

To capitalise on their Red Hand and Farney neighbours being beaten by the Royals, Armagh must avoid a slip-up of their own against Meath and, if they do so on the back of an away win over Wexford, should still be well-placed for the run-in.

Armagh made two alterations to their starting team from the home defeat to Tyrone, with wing back Shauna Grey from Dromintee dropped in favour of Ballyhegan teenager Grace Ferguson, who had been brought on for her before the interval in Silverbridge.

The other change saw Silverbridge’s Niamh Reel, recently returned from Australia, start at corner forward in place of Granemore schoolgirl Corinna Doyle, having been eased back into action off the bench in the first couple of fixtures.

Visitors Armagh got off to the worst possible start with their old nemesis Ni Mhuircheartaigh hitting Anna Carr’s net in just the fourth minute and, when she raised a white flag in the 10th, it put Kerry seven up.

The other star forward, O’Donoghue, helped herself to a couple of early points with her scores sandwiching one from wing forward Emma Dineen as the Kingdom girls took full advantage of having the elements behind them.

However, the Orchard outfit fought hard to share the spoils for the remainder of the half, the fightback beginning with a left-footed free from O’Hanlon, who had an outstanding afternoon, followed by skipper Kelly Mallon pointing from play.

Kerry responded by reeling off four points in five minutes from separate scorers in forwards Fiadhna Tangney, Niamh Ni Chonchuir and Emma Dineen along with Scanlon to make it 1-8 to 0-2 with 20 gone.

O’Hanlon stemmed the tide with a point and a free followed by Mallon’s second score of the day before Kerry had the last word of the half when wing back Aishling O’Connell raised a white flag in injury-time.

O’Donoghue’s departure just before the break would have appeared to boost Orchard chances but Ni Chonchuir netted right at the start of the second period and, although O’Hanlon hit two frees in quick succession, Ni Mhuircheartaigh replied with a point for Kerry.

Wing forward Eilish O’Leary restored Kerry’s double-digit lead and Armagh didn’t cancel that point out until the 48th minute through Blaithin Mackin, by which time Crossmaglen captain Aveen Donaldson and Ballyhegan’s Eve Lavery had taken over from Ferguson and Tiarna Grimes with Mackin coming out to midfield.

With 10 minutes left, young Doyle was introduced in place of Catherine Marley and, although O’Hanlon pointed, Kerry hit back as sub Andrea Murphy became her team’s ninth scorer, before Armagh’s taliswoman landed another free.

The two quickfire goals suddenly left the result in the balance but there were no further scores either before or after Murphy sent Grey and Granemore youngster Edel Hagney on for Forkhill’s Megan Sheridan and Reel with the game entering injury-time.

Hearing that Monaghan had slipped up 1-13 to 0-9 against Meath was welcome news for Armagh on a Division Two weekend which had begun with Tyrone seeing off Clare on a scoreline of 3-7 to 1-7 at Garvaghey.