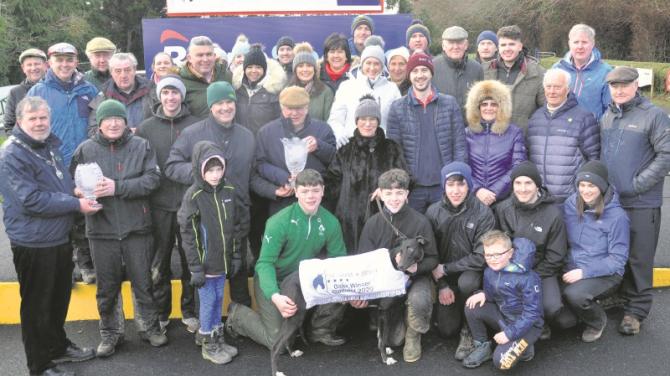 THE 95th National Coursing Meeting concluded in Clonmel on Sunday with some of the best finals seen at the venue for a long time and six outstanding winners.

Afterwards there were some very familiar faces back on the presentation podium but plenty of new ones too.

All coursing supporters everywhere will be thrilled that loyal Derby sponsor John Boyle took the Kevin Smith Champion Stakes with his own Boylesportsmagic.

He was the morning favourite having ousted Callaway Rambler in the third round.

He came from behind Soul Man, held off the late challenge of Snap Streak and then in a brilliant final where the lead changed twice he thundered up the Powerstown Hill to defeat a gallant Gingerbread Bud. He is a son of Newinn Wonder – Nomore Lily.

A half-sister to 2018 Oaks heroine Foxhollow Lady and running for the same connections, joint owners Brendan Matthews (Newry) and Nora Raleigh (Adare), trained by Brendan and bred by John Flynn from his own 2014 Oaks winner Somelittlething with Adios Alonso the sire, the successful sire on this occasion.

Brendan and Nora may have come to Clonmel with high hopes of her brother Foxhollow Adios winning the Derby (withdrawn injured from the third round) but this lady didn’t put a paw wrong all weekend.

Having enjoyed comfortable successes over Tobarmartin Mags and Lets Get Started she was put to the test in the final by the early pace of Please Abbie. The runner-up lost nothing in defeat but the ‘Queen’ showed devastating foot from halfway.

Boylesportsmagic (Mafi Magic – Ballymac Adelpha) was magic today and lit up the packed stands with his ‘come from behind’ performances in the semi-finals and final of the Kevin Smith Champion Stakes.

As already stated it was a most popular success for John and Liam Boyle, but it also ensured trainer Liam Dowling and his family were back on the podium 12 months after their Oaks success.

It was heartbreak of course for Shane Flanagan & the Hey You Sir Syndicate as their triple Cup winner Netflixandchill looked to be on his way to success for most of the final.