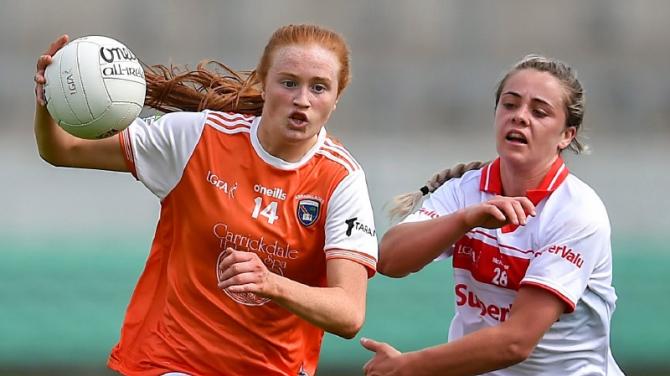 The relegation-threatened hosts had the last word with their only score of the second half, a free from Aisling Murphy, deep in injury-time but by then the visitors had already rattled up a tally of 4-18 in spite of Ronan Murphy using no fewer than 13 subs.

There were first Orchard appearances off the bench for Armagh Harps prospect Tiarna McVeigh and, in the final few minutes, for Killeavy’s Eimear O’Brien and back-up goalkeeper Nicole McKenna from Dromintee.

Niamh Marley got just the second goal of her 12-season Orchard career on an afternoon when Armagh had 10 different names on the board and registered a total of 11 scores in either half.

Triple All Star Caroline O’Hanlon led the way with 2-4 just 20 hours after helping Manchester Thunder get their defence of netball’s British SuperLeague title off to a winning start in front of a crowd of nearly 9000 at Arena Birmingham.

Armagh had 1-5 on the board by the time the opposition opened their account with a free from full forward and captain Catriona Murray which went into the net midway through the half, but that was a rare moment of joy for winless Wexford.

Hagney got the game’s first point from play after a free from O’Hanlon with the latter then pointing and raising her first green flag either side of a score by skipper Kelly Mallon, who ended up with 1-4 to her name.

Silverbridge’s Niamh Reel also got in on the act with a point in the first quarter and the second saw the Orchard crew ease clear with an unanswered 2-3 as both O’Hanlon and Mallon hit the Wexford net.

The experienced pair also landed a free apiece from either side of the field and full forward Blaithin Mackin kicked a point as Armagh turned around leading by 3-8 to 1-0 at the break with the win already in the bag.

Aoife McCoy posted her only score of the afternoon, Mallon landed her second free and O’Hanlon pointed before Mackin reeled off three in a five-minute spell late in the third quarter as Murphy began ringing the changes.

Donaldson struck her first point of an Orchard career which stretches back to 2012 with what may now be branded her cultured left foot just after Wexford midfielder Aisling Murphy had been sent to the sinbin by referee John Devlin.

Mallon hit her fourth point before Wexford were restored to 15 players and McVeigh, Armagh Minor Player of the Year for 2019, got her first Orchard chance in place of Silverbridge veteran Mairead Tennyson.

Niamh Marley finally raised the Orchard outfit’s first and only green flag of the second half on 59 minutes before former soccer star Moya Feehan made her first Armagh appearance since 2015, replacing O’Hanlon.

Deep in injury-time, O’Brien, Ferguson and Nicole McKenna came on for Mallon, Niamh Marley and Carr though the skipper returned for the last 60 seconds when Donaldson had to leave the field following a bang to the head.

That meant Clodagh McCambridge was the only Armagh player who remained on the field throughout, with all 28 squad members togged out on the day being given at least a brief taste of National League action.

Armagh’s most realistic chance of finishing in the top two, as required by this season’s new straight final format, is for Kerry to keep winning and the Kingdom girls duly obliged by beating Tyrone 3-14 to 1-8 at Fitzgerald Stadium in Killarney where Louise Ni Mhuircheartaigh hit 1-9.

The orangewomen’s next opponents Meath, who will travel to the cathedral city on Sunday week, have been something of a surprise package this season with wins against Tyrone and Monaghan so it was a bonus that they dropped points at the weekend.

Comfortably clear in the last quarter in Doonbeg, they were pegged back to a 3-12 apiece draw with hosts Clare who had lost their first three matches but scored 2-2 late on to share the spoils.

At present, Armagh are one of three teams tied on six points and occupy fifth place, between Cavan and Tyrone on scoring difference. Kerry have a perfect 12 points from four games, three ahead of Monaghan, with Meath third on seven.

Peter Lynch and Caoibhe Sloan’s Down are top of Division Three on points difference from Kildare after making it four wins from four with an impressive 3-13 to 0-7 victory over Roscommon, who had come to Burren with a 100 percent record this season.