Guinness smash and    grab keeps Down on course 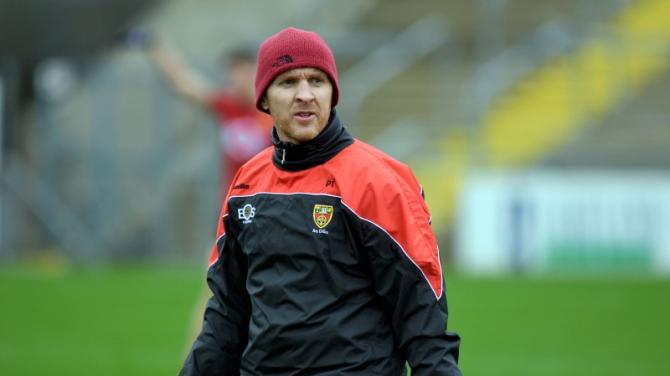 DOWN manager Paddy Tally expects plenty of twists and turns as his side have three games to secure promotion, following Saturday's hard grafted win against Longford.

They travel to O'Connor Park in Tullamore on Sunday to face Offaly, which is another crunch tie, but Saturday's victory was no mean feat and the fact they almost had to win the game twice makes it all the sweeter.

Longford was a game Down had to win. Not just for the points on the board but to project a sense of where the team is going and to find out if they will have the stomach for the battle.

Played in Pairc Esler, Down certainly got their fill of it against an expected physically strong Longford and it leaves promotion very much in their own hands, especially should they win on Sunday, but the Down boss doesn't see it all going just as easy.

“I think it is way too early for that and I think there will be more twists before his league is over,” said Tally.

“We have to examine our performance tonight and look for better things to do and I am not being too critical because the lads tried very hard and we did score 2-13 in a game, which is our highest score this year as well.

“All we can do is focus on Offaly and I know it will be a real tough, tough battle and we will do really well to come out of it next week with a result.

“The outcome of the League this year is so important. It is a crazy year because Division One and Division Four doesn’t matter and Two and Three does, the pressure on the teams and the demand on the players is going to take its toll and at the end of this league there are going to be teams very disappointed if they don’t retain their status in the top tier or if they don’t get to it.

“So we know that every single point in every single game could go down to a score difference like it did last year.

“We just got to keep working on it.”

Played in Pairc Esler, Down certainly got their fill of it against an expected physically strong Longford.

Down had the strong wind to their backs but you wouldn’t have thought it given Longford’s impressive range of scoring.

Again the Mourne men had problems around the middle. To be fair Kevin Diffley is a huge powerhouse of a player with great fielding abilities and he proved as much on Saturday, but Down were slow with the breaking ball at times, and worryingly it is the fourth game in a row where the Mourne men came off second best in midfield.

But there were plenty of positives, such as Liam Kerr, who made his first start of the National League and he grew into the game and forced Longford onto the back-foot with his exciting direct running.

Goal-scorer Cory Quinn was another who won balls he had no right to and while not all his efforts produced scores, the ones that did came at vital times and his ingenuity is what the Down attack needs. Guinness' late goal showed that the Mourne men can dig themselves out of trouble with quality football, something which pleased the Down manager.

“Creating the two goal chances and taking them and that to me is a big thing because we needed something special that time, I thought Cory’s goal was super but I thought James' goal was just outstanding, he broke the line well and tucked it away into the corner.,” Tally said.

“We needed those scores, they were vital because we were on the ropes at the time and we had played enough football but still you always have to look to what we can improve on.”

Peter Lynch gave Longford the lead in the opening minute but the O’Hagan brothers Darren and then Barry popped over scores to put Down ahead with only four minutes on the clock.

Liam Connerton had the sides level, but Down kicked two wides, both long range efforts from Aaron Morgan and Geordie Collins, before Cory Quinn squeezed over a beauty with his back half turned to goal.

It was end-to-end stuff and quite open and no surprise when Longford’s Lynn tapped over his second point to level the score for the third time.

Down had a great chance for goal when Kerr off-loaded to Quinn but he kicked straight at keeper Paddy Colum who saved.

A brace from Johnny Flynn and fine free from Donal O'Hare edged Down ahead before Gallagher and goalkeeper Paddy Collum found the target as did Down's Kevin McKernan and then Gallagher again to level the game for the fifth time.

But it was Down who finished the half stronger, pressing high with Liam Kerr and Barry O'Hagan giving the Mourne men a 0-09 to 0-07 half-time lead.

In the second half the Down side looked to be controlling the tempo and tagging on scores at their leisure as well as making inroads in midfield. But they only scored two points in 20 minutes of the second half, from O'Hare and Quinn, although they kicked three wides.

And with just over ten minutes to go Connerton took advantage in a lapse in the defence and rattled the net and points from Dessie Reynolds and Gallagher put Longford two points ahead.

It wasn't looking good for the Mourne men but Liam Kerr fisted over the bar for a much-needed score before Quinn finished into the net to level the scores. But it wasn't to be so plain-sailing as Longford's Collum and Daniel Mimnagh tapped over the bar to give the Leinster side the lead.

Down needed something special and substitute James Guinness duly delivered because he made the mark in the middle with a fine catch and after a few swift exchanges he was there to finish the ball into the net. It was a brilliant goal and Down hung on for the win with Mimnagh's third point mere consolation for Longford.