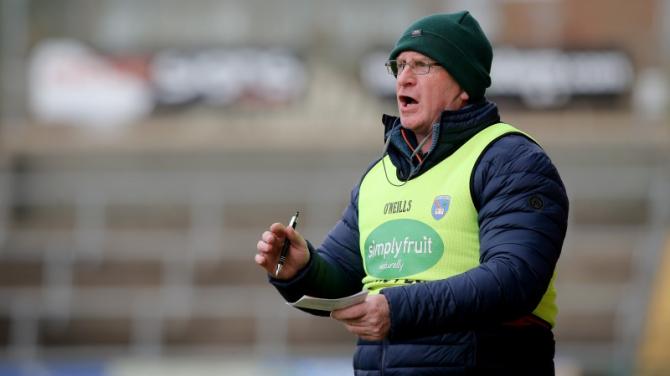 ARMAGH manager Peter McDonnell said he was proud of his players after they lost to title favourites Tyrone in Saturday's Ulster U20 Championship quarter-final.

“I am very disappointed it ended the way it did, we were competitive for a long time and when we where 0-06 to 0-04 ahead in normal time we didn’t push on, we came so far up the field and didn’t break the line and were maybe caught with a man short inside at times,” McDonnell said.

“Having said all of that, we came into this game knowing where Tyrone were coming from and when we landed here last week we were greeted out in the carpark with people saying this game must go ahead today because if it doesn’t it will affect the All-Ireland Final date.

“Now that’s the sort of aspirations Tyrone have, that is not to say we don’t have our own. Our aspirations were to be competitive , to be fit to go step to step with teams that have ambitions of national honours and we pointed to the players as they left the field to say there is very little difference between us and them.

“What I am most proud of is that the players that we inherited from the Minors, who two years ago took a trouncing in the regular championship and the back door to not being all that far off the mark, so I am glad for those lads they have been competitive.”

Played in the Athletic Grounds Armagh were in front in the early stages with Ciaran Mackin, Eoin Woods and Tiernan Kelly impressing.

Armagh were the happier side going in at the break level, even though they had an extra man because Tyrone played with a significant wind to their backs.

Played in front of a crowd of 891 supporters in The Athletic Grounds it was a cagey contest although both sides had more chances than their combined first half tally of six points suggested.

Carrickcruppen’s Eoin Woods struck a wonderful point from the right corner of the Dalton End to give Armagh the lead in the opening minute and Justin Kieran’s tagged on another, which put the Orchard lads on the front foot.

Tyrone pressed high early on but Armagh were content to drop numbers back with Eoin McConville wearing number 14 and playing sweeper.

Despite the strong wind behind them, it didn’t always seem to work to Tyrone’s advantage, Tiarnan Quinn kicked a couple frees wide, when on other days they might have gone over the bar.

Quinn’s converted free on seven minutes opened Tyrone’s account and the same lad had the sides level with his second converted free with 20 minutes played. Inbetween Armagh had four attempts at goal drop short while Tyrone getting unstuck by a hard-working Orchard defence.

Woods put Armagh back ahead with his second point, another tight-angled effort, but Tyrone were level before the break as Matthew Murnaghan chipped over the bar, following a poor kick-out from Shea Magill.

And Tyrone were reduced to 14 men when Ryan Jones was given a straight red for an off the ball incident with 29 minutes played.

Tyrone started the second half with Red Hand star Darragh Canavan replacing Gray and they almost it the net seconds into the restart but Joe Oguz lashed his close-range shot at keeper Magill, who saved.

Armagh hit back and Kierans nabbed his second point with an intelligent forward mark and he then added his third with a super turn and strike.

Donal Conlon stretched Armagh’s lead with a fine point after a patient build-up but that man Cavanan closed the gap again with a stunning point.

Tyrone’s 11th wide sailed over as the game entered the final ten minutes, trailing by two points, but Tiarnan Quinn kicked from 35 metres and caught the keeper of his line to give Tyrone the lead for the first time on 51 minutes.

But there was more drama as James McCormack held his nerve to send over the free to send the game into extra-time.

But extra-time belonged to Tyrone as they kept the young Orchard guns silent.

There was a sour note to the game as McDonnell wasn't happy with the alleged 'sledgeing' of one of his players.