Tucker Brothers title could be a ticket to Tokyo 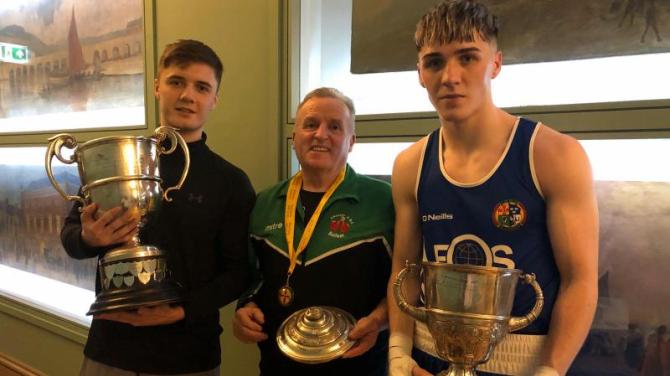 WELL-respected Belfast boxing coach Harry Hawkins has praised the performances of two Newry brothers Kane and Jake Tucker after they both won Elite boxing titles on Tuesday night, insisting that Kane could be on the Irish plane to Tokyo.

The Tuckers weren't the only boxers from the area to compete in the Ulster Hall Finals,

Mullaghbawn's Eugene McKeever, who boxes out of Holy Family Drogheda, won the 69kg Elite title, Rory Lavery of Warrenpoint won the 60kg, while Crossmaglen's Shauna O'Callaghan beat Rosie Doherty 4-1 in a special contest in front of a packed hall. It also was a big night for St John Bosco's Dennis Borskins, he fought well but lost 0-5 to Patrick Rogers.

The Tucker brothers travel to Germany tomorrow (Wednesday) as part of the Ulster Elite High Performance team and Hawkins was impressed with what he witnessed in the Ulster Hall last week.

“They are very young at their weight, which makes it even a greater achievement and I was delighted for the two boys.”

“Kane would have been expected to win because he made a big breakthrough this year, and although he hurt his hand in the Irish Elites, getting selected by Ireland to go to the World Championship was massive for him,” Hawkins said.

“He not only won, but he won with a first round stoppage, so it just shows how much he has come on over the last year.

“The boys are starting to fill out to their weight, I think last year or the year before Kane was between 75kg and 81kg, but now I can see with the training and all that he is doing he has really developed into a full 81 kilo boxer and he is bringing his strength and punch-power with him.

“He is great to train, you could set out a tactic for him or ask him to try something and he would go away and practice and practice, he is so easy to coach.”

“We were very confident going into the Irish Elites and in his first fight he damaged a bone in his hand,” Hawkins said.

“Luckily it wasn't broken, we thought it might have been broken or fractured but it wasn't although it had swollen up so there was nothing we could do besides pull out.

“The guy who he was to fight in the semi-final Emmett Brennan, he ended up winning them and he is now going to the Olympic qualifiers, which are next month.

“Good luck to Emmett he deserves it, I think the Irish champions should go and it was unfortunate what happened to Kane.

“Tuesday night was his first fight back after the hand injury, so really if Emmett doesn't qualify in London there is one more qualifier left for Ireland and that would be in Paris in May.