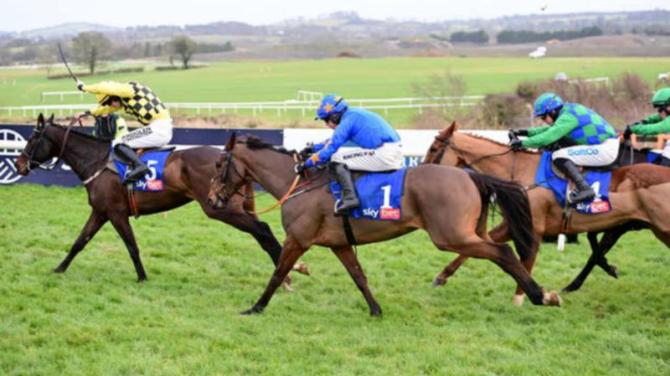 ONE racing commentator described Dreal Deal success on Sunday ‘as the stuff fairytales are made ’, writes Peter Bayne

Well for South Armagh based trainer Ronan McNally all roads lead to the prestigious Cheltenham Festival, the home of National Hunt Racing, in March after his six stable star captured the Grade Two Moscow Flyer Novice Hurdle in some style.

Despite being a big drifter in the betting market, 9/1 out to 22/1, Dreal Deal lived up his name coming from last to first in the final straight to defeat the Willie Mullins trained Ganapathi by over three lengths.

In claiming vicyory number six on the bounce (four hurdles and two flat) the geldeing brought his total prizemoney earned to date to over £43,000.

Sunday's Grade 2 Moscow Flyer Novice Hurdle was a world away from the Navan handicap hurdle he landed off a mark of 84 in September.

His rating, following Sunday’s win, is now at a lofty 142, and it looks very much like the sky is the limit with plenty of mileage left on the clock, as they say.

The winning trainer revealed having had uncertainties before the race with the stable horses just not themselves over the Christmas period coupled with the bad weather hampering prerparations.

McNally said: "His preparation wasn't ideal and that's maybe why the horse drifted. We did fancy him but my horses weren't 100 per cent over Christmas and had a week off.

“We also had frost at home and missed valuable work and took him to the beach on Sunday, but it was half-frozen so he hasn't really galloped. He hasn't been eating as well as he can, either, and his coat hasn't been great. Denis [O'Regan, winning jockey] also thought he needed the run.”

Anyone who laid the odds would have been happy for much of the contest, with Dreal Deal sitting last and seemingly struggling under O’Regan turning into the straight.

However, as soon as O’Regan asked for a bit more effort, Dreal Deal switched on and rounded the field to win in good style. He wasn’t stopping at the line so the famous Cheltenham Hill should hold no fears.

On future plans, McNally added: “He won’t be going to the Dublin Racing Festival and will probably go to Cheltenham now. I think he’s entitled to go there. If we have to go for a lesser race in between we will do that. If not it will be straight to Cheltenham.

“He will probably go for the Supreme but will be entered in the Ballymore as well. That was the dream but first he had to go and do that today. He’s done it now so we can dream.”

Dreal Deal was trimmed into a general 20-1 from 66-1 for the 2m½f Sky Bet Supreme on the opening day of the festival, with the same odds available for the following day's Ballymore over 2m5f.

Winning jockey Denis O'Regan said: "I thought they went very fast and I was nervous with her [Echoes In Rain] getting the allowance.

“His handicapping experience stood to him and he kept jumping so well that I was able to hold on to them."

O'Regan added: “He can travel real well but it just takes him a while to get going and thankfully he got going in the straight. He’d a good jump at the last and won all right in the end.

“He’s definitely entitled to step up into higher company again and it’s something to look forward to. Well done to Ronan and the team.”

The McNally stable has certainly enjoyed a season that they will live long in the memory.

As well as the Dreal Deal, the stable’s other star ‘The Jam Man’ has delivered on more on one occasion taking the prestigious Troytown Chase at Navan along the way.

McNally revealed that The Jam Man is due to take his chance at the Dublin Racing Festival at the end of the month.