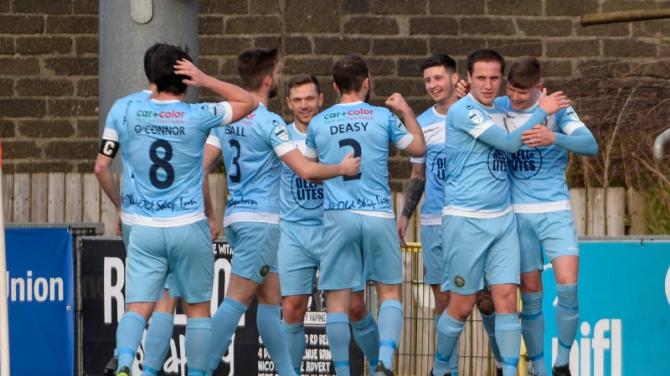 VICTORIES in each of their past two matches – with six goals scored and only one conceded – will see Warrenpoint Town travel to Belfast in good heart for tonight’s Premiership meeting with defending champions, Linfield (7.45pm, writes Niall Crozier.

Last Tuesday night’s 4-1 rout of bottom of the table Dungannon Swifts at Milltown was followed by an even more impressive 2-0 win against Crusaders on Saturday afternoon at Seaview. Half a dozen goals in two outings for a team hitherto dogged by an inability to apply the finish to some very good approach work is suggestive of a dramatic improvement.

Indeed, had Lady Luck smiled a little more favourably on them, last weekend’s victory in North Befast might well have marked the completion of what would have been a notable hat-trick, for the consensus of their February 27 clash with high-flying Coleraine had been that they were well worth a share of the spoils.

With a maximum six points from their last two games, the Town’s positivity ahead of tonight’s showdown with the most successful club in the history of the Irish League is understandable, even though Barry Gray’s much-improved locals’ most recent visit to the venue ended in a 6-0 trouncing (January 23). And in 23-year-old Shayne Lavery the Blues have the leading goalscorer in the Premiership; currently the midfielder’s tally is 13. Collectively, Warrenpoint have scored 22.

Asked if he could explain his side’s recent burst of goals, Town manager Barry Gray said, “I think it’s probably down to a wee bit of stability, with regular fixtures after the stop-start nature of things because of Covid. We really struggled with that, but because the games are now coming thick and fast we’re developing as a team as a result of playing together.

“We’ve also brought players in during the past [transfer] window or two and it takes time for them to settle. We’ve been patient and we’re maybe beginning to see some reward for that, but there’s a long way to go with what we’re trying to build.”

He continued, “We’d a decent enough display at Coleraine, but we gave them two goals and when you do that it’s always going to be difficult. But if you look at our performances in the last three matches, we’ve been pretty strong in a relatively short turn-around. Our focus at this stage is on trying to get consistency of performance. If we do that, hopefully we’ll see it in our results.

“Last time we were at Windsor Park it was a very long day and it ended in a heavy defeat, so we’ve got to make sure we don’t go down the same path again.”

The schedule certainly is testing Warrenpoint in terms of their physical and mental strength, for those matches against Coleraine, Crusaders and Linfield – currently 2nd, 5th and 1st respectively – will be followed by a Milltown date with the other half of Belfast’s ‘Big Two’, Glentoran (4th), this Saturday (3pm).

The resurgent Glens, who host Ballymena United tonight, are flying as a result of having beaten old rivals, Linfield, in each of their recent back-to-back meetings, 0-1 at Windsor Park and 3-1 at The Oval. Having won each of their past five matches the East Belfast men boast the best current form in the league following a wretched start to the campaign.

“Crusaders, Linfield and Glentoran are three of the hardest fixtures you could face in a seven-day turn-around,” Gray said. “If somebody had offered you three draws, you’d have taken their arm off for that. But three draws give you three points and we already have that after beating Crusaders on Saturday.

“So that gives us a wee bit of comfort. We have those three points in the bank, regardless of what we get against Linfield and Glentoran, so we’ll be happy to take whatever else we can get from those two games.”