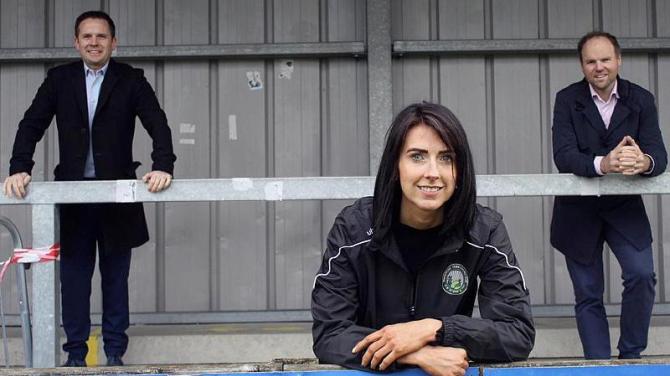 “Go for it, know how to hold your own, confidence is key. Be confident in what you’re putting yourself forward for and don’t ever think that the fact you’re a female should hold you back.”

That is the advice Warrenpoint Town F.C. General Manager Aoife Downey, gives to women who have a passion for sports and are interested in working in sports.

As the only female general manager employed by an NIFL Premiership team, Downey is an example that women can achieve important roles in what was once thought of as, ‘a man’s world.’

As the general manager, Downey oversees all of the club’s operations and serves as the link between the business side of the club and the academy and coaching.

Downey deals with player registrations, contract changes and the club’s administration with the Irish Football Association. Having worked as a manager in a pharmacy in a previous role, Downey has experience of working in a business and she points-out that football clubs are no different.

“A lot of people look at a football club and they just see the football. They don’t see that it’s a fully functioning business behind the scenes. It’s just like running a supermarket, you still have the same overheads and the same foundation behind it. You just have this sport as the front of it.”

Also, in her role Downey stays in communication with the heartbeat of the football club, the supporters. However, in a year where stadiums are empty and large gatherings are discouraged, the COVID-19 regulations have made this the most challenging aspect of her job.

“It’s made it really difficult. I’m not even from Newry, I’m originally from Belfast, so to come into Warrenpoint where it’s very community based and try and get on board with fans and volunteers, when you don’t actually get to see any of them or communicate with them, has been really difficult.”

Downey is facing these challenges head-on and keeping a positive outlook. “I’ve kind of embraced it because I feel that the only way is up for me.” Downey, also acknowledges the backing she has received from everyone at Warrenpoint, “from volunteer level, the whole way up to the board level, I couldn’t fault any of them for the help they have given me.”

Backing from the board has never been in question, as Warrenpoint Town’s Chairman Connaire McGreevy told the club’s official website on the announcement of her appointment. He described her appointment as, “another step in the right direction,” and said, “I believe Aoife is well equipped to deal with all matters in the running of a football club at elite level.”

Director Brian Reid also offered his support. “It is great that the club is able to continue to develop and appoint Aoife as General Manager. Building a sustainable, skilled team to support football both on and off the pitch is fundamental to the longer-term plan at Warrenpoint Town.”

Any further doubts that there may have been were quickly eased, as Downey settled into her role. She said, “there’s always the idea of ‘you might just be a ticked box.’ That went through my head at the start that ‘maybe they’re just trying to show they’ve got a female now.’ But definitely, from when I got the job, that hasn’t been the case, they’ve never treated me like that, and they’ve reassured me that I was hired based on merit. That was very reassuring because I am working in such a male-dominated arena.”

Downey’s appointment comes not as a ‘ticked box,’ but as a result of the work that she has put in, as her masters degree in Sports Psychology shows.

Having achieved an undergraduate degree in Psychology, Downey did her masters degree out of a love of sport. As for what the degree entailed, Downey said, “It embodies so much of the topic of psychology, people are often surprised that it’s not just the psychology of sport itself, but it looks at mental health and it covers helping players mentally, when dealing with injuries and motivation.”

The course gave Downey the skills to enter into a career in football, but has also changed her viewing experience of watching the beautiful game – for better or worse. “I’m always analysing what everyone is doing. Even if I watch football on the TV, sometimes I think some of the players could benefit from mental skills training, so it’s probably ruined sports for myself from a spectator’s point of view!”

When discussing her course, Downey made an observation regarding the lack of female members who were involved. “In my masters course there were only four females on the course. Psychology is normally a female-dominated arena, but in the sporting side of it, it wasn’t. In my undergraduate, I would say that not even 10% of the class were males. But, when it came to the masters, which involved sports, there were a lot more males in it.”

Downey’s appointment by Warrenpoint Town shows that progression is being made and that women can attain important decision-making roles within football. However, there is still a generally low number of females employed in key roles in football

. Despite this, Downey doesn’t feel that there is any wrongdoing against women by football clubs, but that more women should try to get involved. “I don’t know that it’s the sports necessarily discriminating, as opposed to maybe women not getting themselves out there as much. A lot of women would maybe be afraid to put themselves forward for it.”

One fear which may hold women back is the thought of having their opinions belittled or dismissed because they are female, but when asked about any experience of this happening to her, Downey said, “No not really. I think that was an insecurity in myself at the start, and thought it would happen, but since I have gone into it, I haven’t been made feel like that. I have never been made feel dismissed, by anyone at the club or anyone within the Irish Football Association, because I’m a female.”

Downey’s answer is encouraging and shows that possibly the attitudes of people involved in football are progressive and accepting of female input. Downey herself is no stranger to the work being done to progress female involvement in football, as she achieved an OC accreditation from completing the IFA Female Football Leaders Programme. The programme addresses the finance and marketing side of football, and as stated on the IFA’s official website, is designed to help address the low levels of women in key decision-making roles within football.

Downey advocated the benefits of the course for any women interested in working in football. “I did the course because I thought it would be very beneficial to have in terms of marketing and finance, because as the general manager a lot of the job is to do with how you can raise funds and how you can get the club out there. It’s good for networking as well, because you meet so many other people who are involved in football. It was across all of Northern Ireland, so it was good to get networking with other people.”

Whilst Downey is enjoying her time behind-the-scenes, she will be hoping that the Warrenpoint Town players continue to enjoy their time on the pitch, as they have done so far this season. “They’re doing great at the minute, it’s nice to be a part of it and see the inner-workings of it.”