Irish runners to light up Cheltenham 2021 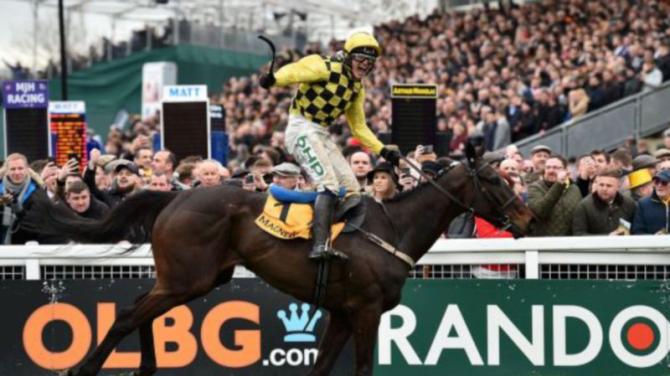 IT has been described as the Olympics of the National Hunt season.

Yes, Cheltenham 2021 is upon us once again and it’s that time of the year when a little flutter can pay handsome rewards.

Of course Cheltenham 2021 will be different.

Covid 19 means that no crowds will be in attendance and that famous ‘Cheltenham Roar’ when the white flag is raised for the Festival opener will be sadly missed.

While the crowds will be missing, the standard of horse racing will be right out of the top drawer.

Of course there be the huge number of Irish trained runners throughout the four days.

In recent years it has been an Irish bonanza and all indications are that the next four days will be no different.

Leading Irish trainer Willie Mullins has a stable full of stars and could have his best Cheltenham ever.

Heading his battalion is defending Gold Cup winner Al Boum Photo who is seeking his third win in the top race of the meeting.

While bookmakers remained closed punters can still have a wager online with any of the local firms.

The opening afternoon of the Cheltenham Festival is packed with top quality and starts with a bang as the best young hurdlers clash in the opening Sky Bet Supreme Novices' Hurdle. The newly-named Sporting Life Arkle crowns the champion two-mile novice chaser and the headline race on day one is the Unibet Champion Hurdle, won by some legends of the sport over the years including magnificent mare Dawn Run, the hugely popular Brave Inca and three-time winners Hatton's Grace, Persian War, See You Then and Istabraq.

The McManus runner suffered a shock defeat to Silver Streak in his prep race but is sure to be spot on for the big day.

The Rachel Blackmore ridden Honeysuckle will be the main hope of Ireland and this great mare is taken to continue her winning sequence.

The style of her latest win at Leopardstown was right out of the top drawer and receiving the mares allowance only enhances the chances of the Henry De Bromhead stable star.

In the Arkle, Sheskin could come out on top in what looks like a vintage renewal.

Ladies' Day consists of a fine blend of speed and stamina, with the Betway Queen Mother Champion Chase one of the most exhilarating races of the entire week as the fastest two-milers fly around Prestbury Park's demanding chase course.

Chacun Pou Soi, trained by Willie Mullins, has been in scintillating form all season and he’s a winner bar a fall.

The newly-named Brown Advisory Novices' Chase is a severe examination for burgeoning staying talent and the Mullins trained Monkfish will be another short priced favourite to oblige.

The Cross Country Chase gets better by the year, with dual hero Tiger Roll famously going on to claim Grand National glory at Aintree on the occasions he was successful. Last year he had to settle for second behind the promising French challenger Easysland who is back for another tilt at the prize.

St Patrick's Thursday - as it's affectionately know (though St Patrick's Day does fall on the Wednesday this year) and every reason to celebrate with a couple of cracking Grade One contests in the Stayers' Hurdle and the Ryanair Chase.

The Stayers could be the best race of the week with former Champion Paisley Park one the favourites.

Envoi Allen is unbeaten and 12 months ago showed that the Hill at Cheltenham hold no fears.

His odds are pretty short but it would take a brave man to bet against the jolly.

One of the most sought-after titles in racing is decided on the final day of the Festival and always promises to provide the greatest spectacle.

The WellChild Cheltenham Gold Cup is a race associated with the elite of the sport and nothing can rival the Cheltenham roar as the horses charge up the famous hill - last year saw Al Boum Photo claim back-to-back wins in the race, the first horse to do so since Best Mate who went on to win a third the following year. Willie Mullins' charge is back to try and emulate that great chaser this time around.

The JCB Triumph Hurdle and Albert Bartlett Novices' Hurdle also crown top-class talents, while a recent tweak to the programme now means the Martin Pipe Conditional Jockeys' Handicap Hurdle is the 28th and final race of the Festival.

From a punters point of view it will go one of two ways.

All the hotpots will oblige and the bookies will be squealing by close of business on Friday evening.

Or, turnover after turnover, a punters bloodbath.

Never have I seen a poor bookmaker or one which failed to open the next day.

Its a marathon not a sprint.

If having a gamble bet wisely and only what you can afford.