'A Case of You' and the rest nowhere 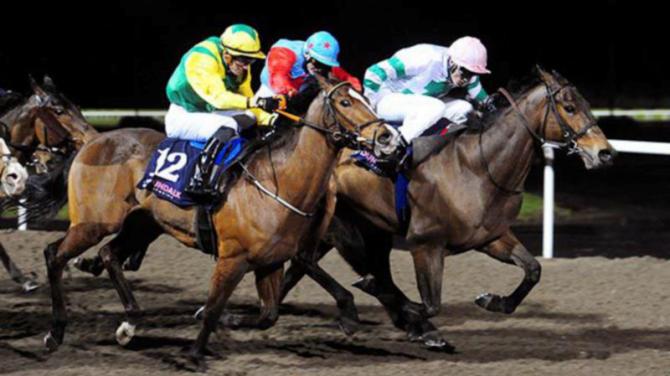 The star of Friday nigh was A Case Of You, didn’t disappoint on what was his first run for trainer Ado McGuinness.

Having won the Group 3 Anglesey Stakes at the Curragh on his latest start, it was a surprise to see him easy to back. He was eventually sent off as the 10/11 favourite.

His supporters, though, never had a moment’s worry as he came home 3.75 lengths clear of Logo Hunter in the DundalkStadium.com Race in the hands of Ronan Whelan.

Ado said afterwards: “He’s a nice horse, which is why we bought him for Gary Devlin. He’ll go for a Guineas trial at Leopardstown now and has an entry for the English and German 2,000 Guineas. He’ll have Royal Ascot as an option, too.”

The County Dublin trainer looks to have yet another exciting horse on his hands.

Three favourites won on the night: A Case Of You plus the David Marnane-trained Poet’s Pride (11/4), who was always prominent before taking up the running approaching the furlong and then winning well for Billy Lee in the five-furlong handicap, and the Fozzy Stack-trained Tooreen Angel (15/8), who followed up her Dundalk maiden win on February 1st by narrowly defying 12/1 chance Bring Us Paradise in the Irishinjuredjockeys.com Handicap. The winning rider was Mark Enright.

The biggest-priced winner of the evening was Pretty Little Liar (18/1),who landed the 12-furlong handicap under Danny Sheehy. The David Dunne-trained 8yo mare was winning for the first time since February 2019 but, as the winning handler rightly pointed out, had hinted at a return to form with a good run at Dundalk on February 17th.

Popping up at 16/1 was Approach The City, ridden by Shane Foley, in the HOLLYWOODBETS Horse Racing and Sports Betting Claiming Race. He cost owner and trainer James McAuley just 2,000 guineas at the Horses In Training Sale at Newmarket last October and the trainer has developed a remarkable skill for winning races with cheap acquisition

James’ Limerick winner on March 14th, Behind The Wall, was acquired at the same sale for the same amount and, of course, Sceptical, who turned out to be a Group-1 sprinter, was bought for just £2,800.

Gormanston, returned at 14/1, clearly appreciated the drop in trip (he had previously won over ten furlongs) to land the seven-furlong handicap under Robbie Colgan, with winning trainer Nigel Slevin saying: “He travelled fierce well and I’m delighted for his owners (the Harbour Lads Syndicate) who have been very patient. He’s a stuffy horse and has benefited from the swimming pool we have put in at home.”

Returned at 12/1 was Rock Etoile, who landed the finale, the second of the card’s mile handicaps, for the father-and-son team of trainer Andy Slattery, whose horses continue to run well, and jockey Andrew Slattery.

The winner was running in a handicap for the first time, with the trainer’s brother Brian saying afterwards, “He’s a nice horse and is progressing all the time. We are delighted for the owners, Liz and John Moloney as this is their first winner.”

Trainer Kevin Prendergast had a remarkable strike-rate with his runners at Dundalk in 2020 so it should have come as little surprise to see Alhaazm (10/3) win the first of the card’s mile handicaps in the hands of Chris Hayes.

This was Chris’s 20th win in the Dundalk Winter Series Jockeys’ Championship, which came to a conclusion this evening, a tally that saw him crowned the winter series champion for the first time.

Landing the Winter Series Trainers’ Championship (for the fifth year in a row) with 21 winners was Joseph O’Brien.

We offer our thanks and congratulations to Chris and Joseph on their fine achievements.

The home of British and Irish racing is Racing TV. Watch every race, plus replays, live from 61 racecourses. To join, call 0818 776779 or visit racingtv.com/join