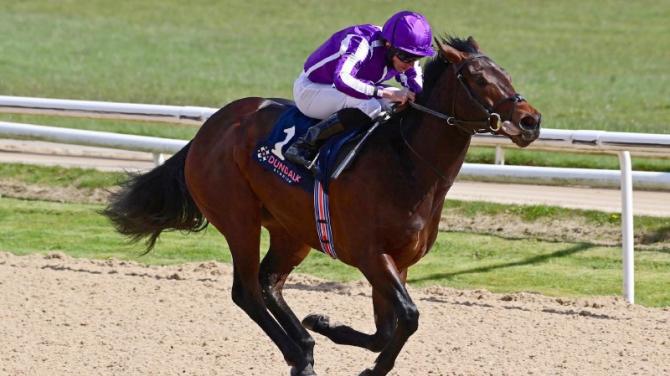 There were doubles on the card for jockeys Colin Keane and Ronan Whelan on April 10th, Ado McGuinness nudged ahead of Joseph O’Brien in the Dundalk Stadium Trainers’ Championship for 2021, and we surely saw a Royal Ascot-bound winner of the opening race.

Let’s start with that opener. Cadamosto (7/4joint-fav), who cost 130,000 guineas and is a son of No Nay Never, ran out an impressive winner of the Irish Stallion Farms EBF Maiden in the hands of Ryan Moore.

His trainer Aidan O’Brien has started the season strongly and this colt may well now seek to emulate his father, top-class sprinter Caravaggio, who won this race in 2016 before going on to win the Group 2 Coventry Stakes at Royal Ascot.

The first leg of Colin Keane’s double was Lunar Power (11/2) in the Hollywoodbets Horse Racing & Sports Betting Handicap for trainer Noel Meade, who also saddled the runner-up, Too Bright.

As they were for Ragtime Red (22/1) ahead of his win in the first division of the 1m2f150y handicap as Billy Lee’s record on the Anthony McCann-trained gelding was 213 and he had never been beaten on him when partnering him at Dundalk over today’s trip.

That record, of course, remains intact. We’ll all be wiser next time!

Colin Keane’s double was completed when Ozymandis (9/4) won the card’s final race, a maiden, for his boss Ger Lyons. The winner was well-supported, having been backed from an initial price of 4/1 and he looks smart.

Ronan Whelan’s double came via Maar (4/1), for trainer Ado McGuinness in the Irishinjuredjockeys.com Fillies Maiden, and Sense Of Worth in the second division of the 1m2f150y handicap for Andy Oliver.

Ronan also rode a double at Leopardstown on Sunday on Keeper Of Time, an 80/1-winner of the Ballylinch Stud Irish 1,000 Guineas Trial for trainer John Feane, and Dream Tale for Andy Oliver, whose horses are clearly in good heart.

Sense Of Worth was heavily supported, having been backed from nearly 2/1 to 4/5 favourite, although he only just won (by a nose) from 66/1-chance Rodney Bay.

However, he got the job done and the gelding who stands at over 17 hands and is, according to Andy, “the biggest horse I’ve ever trained”, is clearly open to further improvement.

Maar’s win took Ado McGuinness onto eleven winners for the year at Dundalk, one ahead of Joseph O’Brien, as his good run of form continues. She’s a filly that Ado described as “huge and very well bred…a stakes filly and we’ll go for an (Oaks) trial now.” She clearly has lots of ability.

The Hollywoodbets Apprentice Handicap saw two familiar Dundalk faces fight out the finish with the Joe Murray-trained Burning Lake (7/2 co-fav) just edging out Kinch (also 7/2 co-fav) by a neck. It was winning jockey Joey Sheridan’s first ride for the stable.

Finally, the excellent winter of Chateau Musar (11/2) continued when he won the Crowne Plaza Hotel Dundalk Handicap in the hands of Chris Hayes, whose fine winter and spring at Dundalk continued with this success. He was the Winter Series jockeys’ champion and has now ridden 15 winners at the Stadium in 2021.

Trained by John Geoghegan, Chateau Musar has now won four times at Dundalk from his last seven races, a remarkable achievement. ”He owes us nothing – we’ve had a great winter with him,” said his appreciative trainer.

Dundalk will race again on Sunday April 18th on Hollywoodbets Winter Series Awards Day. The first race is due off at 1:45pm and €117,000 in prize-money will be on offer.

The home of British and Irish racing is Racing TV. Watch every race, plus replays, live from 61 racecourses. To join, call 0818 776779 or visit racingtv.com/join