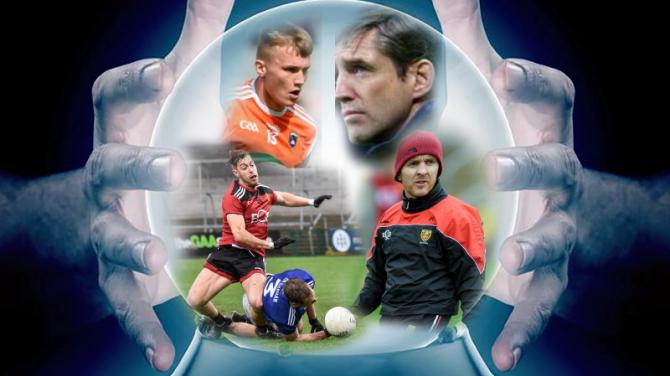 INTER county football swings into action this weekend with Down and Armagh gearing up for what I predict will be a make or break’ 2021 for both teams and respective managers, writes Peter Bayne.

Whilst Armagh and Down both gained promotion last season it will count very little if they are unable to build upon that success over next three to six weekends.

The fixtures come thick and fast and there will be little room for error or for that matter sentiment in the final analyst.

Armagh and Down are counties with proud traditions and a hunger for success. They have invested heavily, especially in Armagh, but this is no guarantee of success,

Indeed, the real litmus test lies further ahead in the Summer when Down face Donegal in the Ulster Championship while Armagh welcome Antrim to the Athletic Grounds.

A good league programme is very crucial to any team which has any aspirations of making any impact come Championship time.

For Paddy Tally and his Down players the trip to Castlebar this Saturday to take on Mayo is as difficult a fixture one could have chosen.

Beaten All Ireland Finalists, Mayo suffered relegation from Division One last season but more than made amends with a successful Championship campaign which ended in defeat to Dublin at the final hurdle.

One also has to factor in that this same Mayo team was National League Division 1 Champions in 2020 and still have the bulk of that team at their disposal.

Under the guidance of Paddy Tally and his backroom team, Down have been progressing year on year and have only themselves to blame for not reaching last seasons Ulster Championship decider when they allowed eventual Champions Cavan to come back from the dead literally at the semi final stage.

Tally has continually brought new faces into the senior set up with an eye very much to the future.

More experienced and higher ranking sides have found Castlebar a difficult place to take points but perhaps first day out is the best time to catch the current Connaught Champions. It will be for the want of trying from this Down team.

Division 1A North could be better called ‘the group of death’.

Armagh along with Tyrone, Donegal and Monaghan. Not an inch will be given and every point will be hard earned.

Promotion from Division Two has brought the Orchard men back to the so called ‘top table’ but do they really have what is required to take on the very best?

The next three months will I believe define this Armagh team and the Kieran McGenney era.

The clash with Monaghan this Sunday is more than likely to be a dress rehearsal to an Ulster Championship semi final.

They have home advantage in their remaining league games but McGeeney knows that defeat to Monaghan and they will be on the back foot with Tyrone looming the following weekend.

All games are scheduled to be played behind closed doors which is a real pity. Hopefully spectators will be allowed later in the Summer.

For now, let the games begin to earnest.

Looking to the Crystal Ball (with rose tinted Tyrone glasses), Down could enjoy a more fruitful League campaign.