With three league games to go, pride now the spur 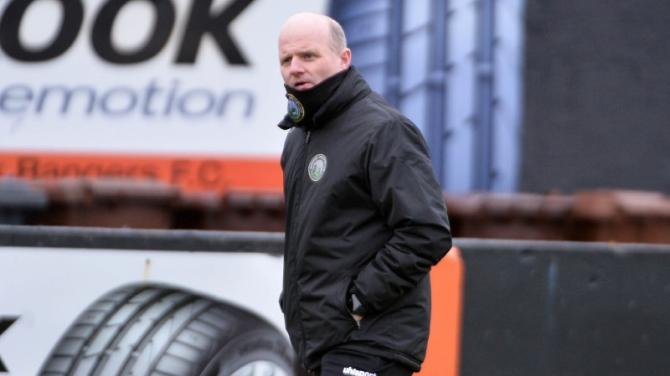 WITH Warrenpoint Town having made their exit from the 2021 Sadler's Peaky Blinder Irish Cup at the weekend, they now know their programme for what remains of the campaign.

Trips to Glenavon and Ballymena United this Friday (May 14) and Tuesday, May 25 respectively, followed by a Milltown meeting with Carrick Rangers (Saturday, May 29), will bring the curtain down on what has been a gruelling Covid-affected season for all concerned. No-one will sorry to see the end of it.

Saturday's 1-0 second round Irish Cup defeat by Championship side Loughgall put paid to Barry Gary's men's interest in that particular competition. The hosts were well worth their victory and had their finishing been less profligate the margin might well have been more than the single goal bagged by Nedas Maciulaitis in the opening minutes.

Warrenpoint felt there had been a foul in the build-up, but referee Jamie Robinson and his assistant both had good views of the incident and neither saw anything wrong. From a Loughgall perspective there was also an element of good fortune about the goal when the ball ricochetted off a hapless visiting defender into Maciulaitis' path.

However, there was nothing fortuitous about the striker's finish, for having strode clear of the Town's rearguard to leave himself one-on-one with 'keeper Andrew Coleman, he was coolness and confidence personified as he rifled the ball into the bottom right corner with unerring accuracy.

After that early setback, the 'Point proceeded to play some neat enough football and began to look fairly comfortable coming forward. The elegant Daniel Byrne prompted things from the back, whil Luke Gallagher was to the fore by virtue of his midfield contribution.

But for all of the possession they enjoyed, Warrenpoint actually created very little against an impressively well-organised home rearguard in which their two young full-backs, Conor Kerr and John Scott, excelled either side of central defensive partners Ben Murdock and Jordan Lyttle. As a result, the visitors' efforts tended to be of the long-range variety and the hosts' goalkeeper, Berraat Turker, dealt comfortably with those, as also was the case when it came to dealing with crosses. His handling was immaculate.

But perhaps what caused Warrenpoint more problems than anything was the quality and intensity of Loughgall's high press by Maciulaitis, Dale Malone and Pablo Andrade. That, coupled with the high-octance contribution of the Villagers' Scott McCullough in the middle of the park closed things down, restricted options and, as the match wore on, led to increasing frustration on the part of the guests.

It really ought to have been 2-0 just before half-time when the totally unmarked and well-placed Maciulaitis headed wide from a perfectly delivered Steven Ferguson free-kick. That was a real left-off.

In the second period, Andrade fluffed two glorious chances to extend his side's lead and in the closing stages, with Warrenpoint throwing men forward in an increasingly desperate attempt to grab an equaliser, Loughgall twice broke to create situations from which they could – and should – have done better.

So, out of the Irish Cup and now facing back-to-back away matches against Glenavon and Ballymena, the teams in contention for a 7th-place finish and, with that, the possibility of involvement in European competition dependent on who wins the Irish Cup.

In the circumstances, Glenavon and Ballymena – currently 7th and 8th respectively – clearly will have every incentive and therefore will be highly motivated for their forthcoming meetings with Warrenpoint who, despite being 9th are too far adrift to catch either. As things stand, all three have played 33 of their 38 league fixtures and have 55, 52 and 33 points respectively.

Having beaten Ballyclare Comrades in the cup and Portadown and Dungannon Swifts in the league, thereby chalking up three successive wins in the space of seven days, that encouraging Warrenpoint run came to a halt at Lakeview Park on Saturday.

With three matches to go and no prizes at stake, it remains to be seen how they respond to the challenges they will undoubtedly face at Mourneview Park and the Ballymena Showgrounds where their hosts will be highly energised.

Having beaten Portadown and Dungannon Swifts away from home in their two most recent league matches, fixtures against the top two of the bottom six now await. It would be quite a quadruple were they to win in Lurgan and Ballymena, too. However, let's be realistic – it is improbale that they will add that pair of scalps to their tally of eight wins bearing in mind the fact that both of their opponents have won 15.

Saturday, May 29 will be Warrenpoin's last run-out of the season with Carrick Rangers providing the opposition.

At best the Town will finish 9th. At worst they will come in 10th of the 12. And to put that in perspective, speaking after his side's victory over Warrenpoint on Saturday, Gray's Loughgall counterpart, Dean Smith, said, “Barry's a good bloke and bearing in mind the mess he inherited when he took over, he has done a great job.”