Star not gazing at league table yet 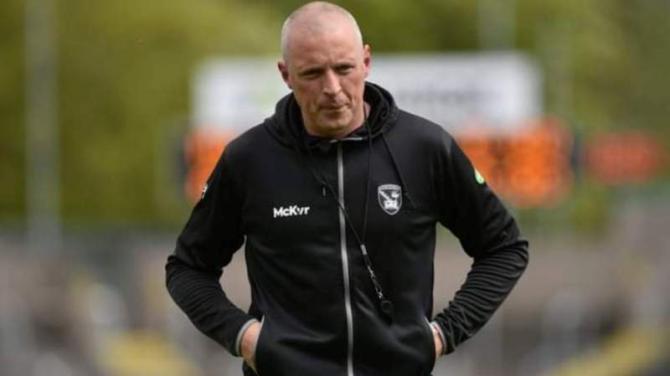 KIERAN Donaghy (pictured) praised his players for their excellent display against Monaghan on Sunday but insisted they won't be caught singing about being at the top of Division One, especially with Tyrone on the horizon, writes Steve Malone.

Armagh face the Reds in the Athletic Grounds at 7pm on Saturday (May 21), where victory would secure divisional status, but given how Armagh have failed to shine against Tyrone in recent years this will be another huge test. But one they should relish according to four-times All-Ireland winner with Kerry.

“Every game is important as I said to the lads, because unfortunately there is so few of them,” Donaghy said.

“It was hugely importation to get a result on the road and suddenly coming down the line is a huge local derby game. That is why these fellas have probably trained for six months behind closed doors by themselves, with GPS on their backs and putting in the hard work and watching their diet and doing all this with all the challenges that Covid brings. The players have to get tremendous credit and I suppose bringing themselves to the point of where they were able to go out and perform.”

Indeed the performance on Sunday was impressive, even when Monaghan brought on their big guns, such as Conor McManus, the Orchard team didn't change what was working for them and cut out what wasn't. Over the years game management has been a hot topic for Armagh, whether it is about being too honest, letting leads slip or rallying too late, but on Sunday they nailed the game-plan, which pleased the Armagh coach.

“Obviously we were aware of it in the first half so not doing it in the second was huge for the defensive unit and likewise our attacking unit did quite well at working out scores when we needed scores.

“It was intense, it was very competitive and you know the sideline point could have gave them [Monaghan] huge momentum but in fairness our boys responded and won a good kick-out and I think Soupy Campbell got a good point. The response is always important in games that are going to be this tight.

“We know how much of a challenge it is for this group of players who have done very well to climb through the divisions under the guidance of Kieran [McGeeney] over the last few years. They are really a good bunch of lads and there is great togetherness and great camaraderie in the group and I think that came to the fore on Sunday.”

It was Armagh's first game in Division One in nine years, and while they impressed the challenge of Tyrone and then Donegal will be greater. If Armagh don't get something from either game then the one win may not be enough to avoid a relegation play-off, however a positive result at either game would secure their pace in the top flight and possibly a challenge for the title. For now though Armagh are on top of Division One, it's been a long road to get there, but the four-time All-Ireland winner isn't counting his chickens just yet.

“Any team that scores four or five goals on the first day of the season will be top of the league and shown on Match of the Day. This is obviously different, it was an important game but with the year that is in it, and the lack of preparation time afforded to us, due to the guidelines. Every game is important as I said to the lads, because unfortunately there is so few of them.”

Donaghy praised Julie Davies and the fitness team and said the players should take confidence from being able to finish 70 minutes of football, despite not haven't play a game in six months and he is enjoying his time in management.

“This is the highest level and working under someone like Kieran [McGeeney] and Denis Hollywood – two top level coaches. It has been enjoyable for myself and Ciaran McKeever has come in and under the guidance to try and bring each of our own ways to the set-up,” said Donaghy.

“You look at Ciaran McKinney and we all saw the kick-outs on Sunday and the time we afforded it in the space of time we had.

“There is so many facets of the game now that we can all bring something to the game and from my point of view we need to do it by working with all the team.

“But focusing slightly more on the attacking side of it, I was OK with 1-16 on Sunday, I would have liked a bit more but that is the beauty about sport you get another chance in another game.”

If Armagh can beat 1-16 this weekend then it should be one cracker in the Athletic Grounds.