Armagh slip into relegation play off 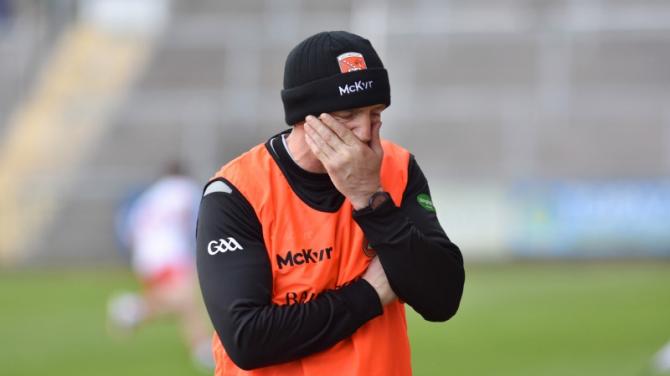 It was a rip-roaring contest, and the Armagh players did the 500 supporters proud but ultimately the drawn game against Donegal was a missed opportunity.

Armagh await the winners and losers of tomorrows games to find out who they play in the relegation play off, but they can go into that game with a lot of confidence.

It was a cracking start from Armagh with Rory Grugan, James Morgan and Stefan Campbell sticking over points to give the Orchard a five-point lead.

Armagh were forced into making a few changes from the team that lost to Tyrone last week, with Ross Finn making his senior debut in place of the injured Aidan Forker.

Former AFL Rookie Ross McQuillan also started for the first time since 2019, with the injured Ryan Kennedy missing out and Armagh were boosted with quick recovery of teak-tough defender James Morgan, despite the Crossmaglen defender leaving the pitch in a moonboot last week.

Donegal were also without their talisman Michael Murphy, with the talented Eoin McGettigan coming in and Stephen McMenamin was a late change for Oisin Gallen, and Eoin McHugh replaced Neil McGee.

As expected, Donegal came back with Paddy McBrearty, Niall O’Donnell and Mark McHugh on target, but Oisin O’Neill struck over three fine scores to give Armagh a 0-10 to 0-06 half-time lead.

Ciaron O’Hanlon pointed only seconds into the restart but Michael Langan’s goal closed the gap.

Still Armagh pressed and Tiarnan Kelly scored a peach of goal after good work from Conor Turbitt and Campbell and with 20 minutes remaining Kieran McGeeney’s men led 1-15 to 1-11.

But from that stage Donegal outscored Armagh 0-05 to 0-01, with McBrearty grabbing eight points, and Jemar Hall on target for Armagh.

There was seven additional minutes played and it was near over when Niall O’Donnell grabbed the equaliser and Donegal were content to keep ball.

It was a super Armagh performance but not enough to win the game.