Down victory a boost to play off hopes 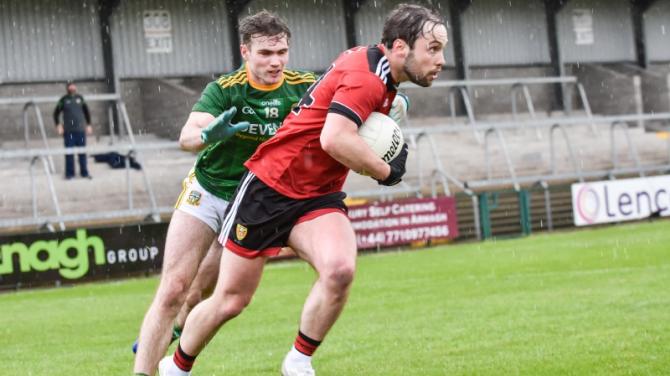 Down will play Laois in Newry to earn their divisional fate after today’s win against Westmeath gave them a fighting chance.

The Mourne men had to grind out a result after coming from a commanding eight-point lead at one point, but it is a massive victory for morale and they played some super stuff, especially in the first half.

Down made a number of changes from the team that lost to Meath last week with Rory Burns returning to goal in place of Marc Reid, while Brendan McArdle came in for Paddy Murdock. James Guinness and Barry O’Hagan also missed out on a starting place with Conor McCrickard getting his first start of the campaign, while Celium Doherty also made the first 15 cut.

Westmeath were largely unchanged to the team that ran Mayo close last week, Sam McCartan was a late switch for Denis Coroon.

Down led 0-09 to 0-03 at the break with Mayobridge’s Cory Quinn and Kilcoo’s Paul Devlin in exceptional form. Caolan Mooney was causing problems with his driving runs and captain Darren O’Hagan was immense. But Brendy McArdle was a rock in defence and when he limped off injured at half-time then the Down defence was always going to become exposed.

Westmeath’s substitute Fola Ayorinde bagged the only goal of the game on 47 minutes and the Midlanders would have scored more but for some stunning saves from goalkeeper Rory Burns, who denied John Heslin from the spot.

Westmeath kept chipping away at Down’s lead but Paddy Tally’s men did just enough at the other end with Barry O’Hagan nabbing the vital point to keep the victory out of Westmeath’s reach.