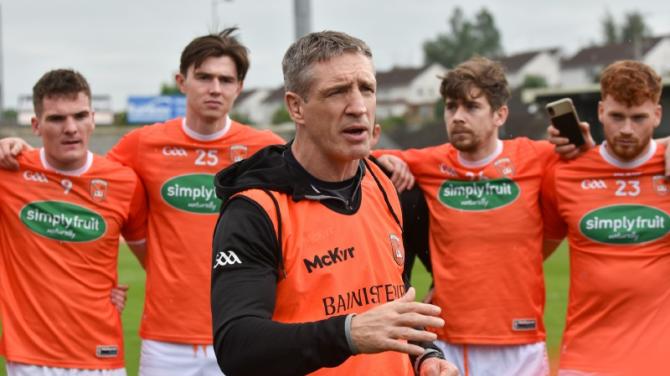 IT’S the hope that hurts.

Thoughts are with the family and friends of Brendan Og Duffy, who was tragically killed on his way home from captaining his U20 team to an Ulster final.

Saturday’s game was a fitting tribute as was the round of applause before the game, which also honoured the sad passing of Cullyhanna’s Majella McKeever, mother of Orchard coach and former captain Ciaran, and Monaghan’s Philip Traynor.

What a game we had in Newry, the intensity on the pitch matched the heat off it, which was scorching.

With an Ulster Final at stake, it was always going to be close, but Armagh lost their way, before clawing the game back to seize a great opportunity and then threw it away again.

It was demoralising and reinvigorating, inventive and predictable but totally and wholeheartedly entertaining.

It was a classic contest and good for the soul and both teams deserve enormous credit for what they put on show, especially in that baking heat.

However, it was still an opportunity missed by Armagh. There were several occasions in the first half they could have gave up the hunt and when goal number four went in, it was a proper thump to the gut. It was going to take something special to get back into the game and luckily for Armagh they possess those type of players with Rian O’Neill and Rory Grugan conducting and substitutes Conor Turbitt and Tiernan Kelly bagging goals, they had done the impossible to go ahead. Oisin O’Neill’s point put Armagh two ahead but the multiple All-Star Conor McManus, showed his craft and then class to rip the final spot out of Armagh’s hands.

It’s a tough defeat for Armagh to take. This squad are sick of hollow morale victories, there have been many of those type of championship exits over the years, against Tyrone, Laois, Galway and Mayo. Of course, they are better than some of the lessons given by Donegal and Tyrone in more recent times, but it’s another one that got away.

Overall, it has been a decent season, as short as it was. Securing Division One was crucial and that was achieved. An Ulster final and a shot at the title was up for grabs and while Armagh’s fingertips were touching, it was disappointing to miss out.

McGeeney has built a strong squad, not too many will leave, and Ethan Raffety, Aidan Nugent and Mark Shields should be back next season while young players such as Eoghan McDonnell should get more game-time.

Played in Newry’s Pairc Esler, Armagh trailed by seven-points at the break but being an eternal optimist is part of the Orchard DNA, there was hope if not belief of a gallant turnaround

Monaghan had cut the Armagh defence with sharp movement and accurate kicking and there was little championship debutant keeper Shea Magill could do about the goals.

Losing Blaine Hughes before kick-off was a blow as he was in great form, including his Man of the Match award against Antrim.

Four goals hammered home Monaghan’s authority to let Armagh know that they were playing with the big boys.

The game began at rapid pace and Conor McManus’ goal in the second minute showed Monaghan’s intentions. Jarly Og Burns and Rian O’Neill hit back points for the Orchard but Monaghan were busy trading scores before Jack McCarron netted the second goal. Monaghan tore into them but Armagh had chances, Andrew Murnin’s long range effort bounced over Rory Beggan’s head and was heading for the net, but Ryan Wylie cleared off the line.

Those were the differences; Monaghan were taking their chances and in fewer passages of play where as Armagh had to work harder for their scores.

Grugan, Rian O’Neill and Niall Grimley weighed in with points, but Michael Bannigan blasted Monaghan’s third goal after a clever one-two with McCarron and by the first water-break Monaghan already had one foot in the final. 0-08 to 3-06.

Armagh showed encouragement with Jarly Og Burns’ point, and they could have cut the gap to three, but three wides in a row were frustrating before Grugan hit the target with 24 minutes gone. But less than a minute later Kieran Hughes had the ball in the Armagh net. The Orchard defence had been caught out again with Jack McCarron at the heart of all the goals.

Oisin O’Neill, Greg McCabe and Ciaron O’Hanlon kicked over super points and Aidan Forker’s introduction nullified the threat of McCarron. Stefan Campbell added another score in between a brace of converted frees from Monaghan goalkeeper Rory Beggan to conclude the half.

Substitute Conor O’Neill, Oisin O’Neill and McManus (frees) traded points as Armagh were getting into scoring positions and had tightened up in defence, but it was still a seven-point gap going into the last quarter (0-17 to 4-12).

The restart after the second water-break was only a minute old when Rian O’Neill kicked long towards the Monaghan square where Conor Turbit fisted into the net, taking an awful hit from Beggan in the process, for a brilliant goal.

Armagh’s confidence was rising, and they had fresh legs with power and pace to test a weary and overheated Monaghan defence after the inclusion of Ross McQuillan and Tiernan Kelly.

Murnin swung over a great point and what seemed improbable looked possible as Monaghan’s Stephen O’Hanlon and Cullyhanna’s McQuillan exchanged points. Rian O’Neill closed the gap again with a fine point before Armagh displayed some ingenuity to engineer a goal chance which Lurgan lad Tiernan Kelly took brilliantly to give the Orchard the lead.

The Armagh fans were in full voice and when Oisin O’Neill struck his shot over the bar Pairc Esler was rocking with the imaginative chant of ARMAGH – ARMAGH. Social distancing in the standing area had gone out the window with sheer excitement.

Armagh were two points ahead although McManus cut the gap with another point. Rian O’Neill attempted an audacious 70-metre free and while it had the distance it went wide. Armagh were trying to get more scores as Turbit couldn’t get hold of Oisin O’Neill’s pass. Monaghan were pressing high, and O’Hanlon pulled the trigger, but Murnin made a fantastic block and with 67 minutes played Armagh were still in front.

Five additional minutes were announced and while Armagh had players and possession in Monaghan’s half they failed to tag on another score. Instead they gave the ball away cheaply and McManus was always going to hit the deck when challenged and that’s what he did. His free levelled the score as the game entered additional time and he certainly fooled the ref for the next free, but it was a super strike to convert and swing advantage back to Monaghan.

The treatment McManus received before his kick used up much of the additional time.

Armagh couldn’t get hold of the ball and there was just enough time for O’Hanlon to extend Monaghan’s lead. It was a cruel blow for Armagh, but they’ll pick themselves up again next year, first though they’ll go to war against each other in the club championship, which begins in September.