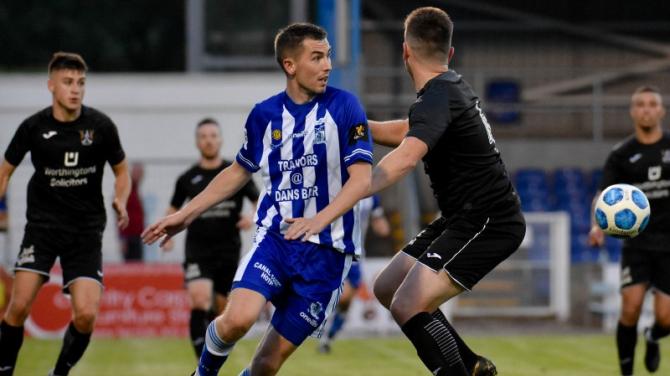 NEWRY City showed remarkable character to recover from a goal down and a poor first half showing, to plunder two second half goals and maintain their 100 per cent Championship record.

It’s now six wins from six for Darren Mullen’s side. And on Friday night at the Showgrounds their latest blockbuster win was the most important of the season thus far, as it came against the only other side in the league with maximum points.

Two goals in a four-minute spell midway though the second half changed the face of the match … and propelled City to victory. And to use a hackneyed phrase it was an inspired substitution that did the trick.

On 68 minutes with his side a goal in arrears, Mark Kelly replaced the injured Thomas Lockhart.

And the big striker, scarcely on the park sixty seconds, made his presence felt in some style when he arrived onto a surging Daniel Hughes run down the left, to gleefully hammer into the Ards’ net from close range.

It was the boost Newry needed and three minutes later City were in front. Jimmy Walker launched in a free kick from way out on the left, Kelly won the ball in the air with skipper Darren King, popping up to slam the loose ball past Ards’ keeper Brian Neeson.

And though Ards pressed hard for the equaliser in that last quarter of an hour Newry defended resolutely and never gave their tough opponents a sniff at the target.

Manager Darren Mullen was delighted with the victory as he told the Democrat: “It’s a super way to win a game and it keeps our unbeaten run going … although it’s not good for the heart.

“I thought we won well. We deserved it. We were a far better team in the second half.

“We tried to play football and kept at it. We missed a couple of chances early on and were possibly thinking it wasn’t to be our night. However, we just kept plugging away and it was a super test of character for the lads and they came through it well.

“They came here to spoil us. If they had left with a 1-0 win they would have said the end justified the means.

“Although in truth we didn’t really play well in the first half. And Stevie (Maguire) pulled off a great save that would have made it 2-0 to them.

“Still we should have had a penalty just before their goal. A stonewall penalty. It wasn’t a difficult decision. The linesman was right in front of it and he made an excuse for it. But some of the refereeing decisions tonight were a bit dodgy to say the least.”

Was it an inspired substitution to put on Mark Kelly?

“I’m going to give Gerry Boyle credit for that one,” said the City boss. “We had a choice of substitution options but Gerry made the suggestion: ‘What about putting Kelly up front?’ He called that one. Mark had an immediate impact. He scored and was involved in the second goal too. I’m delighted for him. He’s a great lad and has come back well from injury.”

On a third goal that Newry should have had, Darren said: “I was hoping we wouldn’t live to regret that one.”

On his tactics, the manager explained: “At halftime we changed it to a 4-3-3 to try and open them up a bit more. We needed to be more attack-minded and I thought with three up top it might have suited us a bit better. Sometimes when you play three at the back there’s a question mark between the centre backs and the wide areas and we didn’t manage to get that right in the first half.

“So I decided to change it at halftime and it worked.”

In front of the biggest crowd of the season Newry almost took a two-minute lead when Decky Carville headed a Thomas Lockhart corner onto the Ards’ crossbar.

And City should have had a spot kick on ten minutes when a defender blatantly handled in the box. But referee Ben McMaster waived away the Newry appeals.

It was a double disappointment, as just one minutes later Salou Jallow crossed from the right with an unchallenged Ross Arthurs heading past Maguire to put the visitors in front.

At that stage Ards had set out their stall with a series of crunching tackles, most of them late, and with the official reluctant to issue yellow cards. And indeed many of the illegal challenges went totally un-penalised.

And in fact just before halftime the speedy James Teelan was felled by the worst tackle of the evening. It seemed a straight red but the referee merely flashed a yellow.

While Ards could have doubled their tally on 41 minutes but Steven Maguire made a tremendous save from Eamon Scannell.

The second half would be a different affair.

With Noel Healy dropping back to left back to reinforce the back four, Newry got their show on the road. Healy and Stephen Moan upped their game, to almost totally blot out the Ards wingers while Lockhart, John McGovern Decky Carville and Daniel Hughes pushed forward.

Chances then began to appear with chinks developing in the Ards armour. Moan found Teelan with a super pass down the right with the Crossmaglen lad crossing accurately. McGovern got on the end of it but his header was straight at Neeson.

Newry went even closer on 67 minutes when, after a Teelan centre, Hughes miscued at the back post.

However, Dingo atoned for that miss by superbly setting up the equaliser for substitute Kelly.

The game could have been over on 74 minutes when Kelly unselfishly set up James Teelan with a defence-splitting pass. The wee man was clean though with only the keeper to beat, but to the groans of the Newry fans, he shot past the post.

However, the two earlier goals had done the trick. And thus it was three vital points to Newry.

It was a brilliant night for the fans who watched a nail-biting affair and Darren Mullen acknowledged their input as he said: “Anybody who came down tonight and who hasn’t been down for a while will be back. There was a great atmosphere and I’ll have to give the fans a load of credit. We badly needed them tonight as we weren’t at our best in the first half. We talked to the team at halftime and spoke of the fans coming down and that we needed to give them a bit more fight. Which we did in the second half.

“It was pleasing all round. We’ll enjoy the weekend and then concentrate on the next game.”

Then it will be Queens next Saturday in Belfast, Darren said: “It will be another difficult game. But having said that, they’re all difficult.

“We’re not getting carried away but we’re confident of the team’s ability.

“We’re getting different tests. We had a physical one tonight and we dealt with it. Same as last week against Dergview. But we’re well fit for tests like these. We’re standing up to teams which you need to do in this division. And then we have the quality to go and finish them off.”