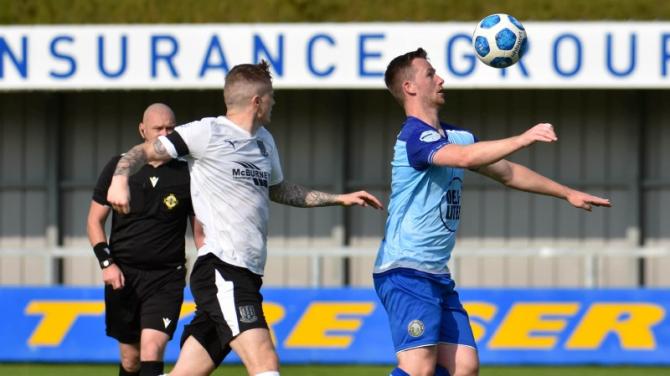 AFTER beating Ballymena United 2-1 at Milltown on Saturday in the opening match of the Irish Premiership, Warrenpoint Town created two little bits of history.

It was the first time in eight tries that the Seasiders have won their initial fixture … and it’s the first time that the Town have topped the Premier League. Well maybe not by goal difference, but they have the same number of points as Linfield, Larne, Glentoran and Cliftonville. Furthermore they are above top-notchers such as Crusaders and Coleraine.

It was a memorable day to be a Warrenpoint fan, though in truth there was a sparse attendance at the match. But those that did attend were delighted with the team’s performance – as was manager Barry Gray. Though he was disappointed with the start, as he said.

“The first couple of minutes was a complete and utter disaster. Everything that you didn’t want to see in the opening few minutes of the league happened. And after that it did take us a wee while to settle and recover. However, the players battled through the first half extremely well.

“In the second half we got the winner and we managed the rest of the game. They hit a lot of long balls and it only takes one mistake to make the difference. But we stood strong. We held a very good back line and we worked extremely hard.

The match was a personal triumph for Kealan Dillon. The talented midfielder was credited with scoring one goal, the winning penalty. Though everybody at Milltown on Saturday would give him the first Warrenpoint goal. There seemed little danger when on 43 minutes he picked up the ball 25 yards out. But Dillon was ice-cold as he took a touch, steadied himself before hitting a rocket drive that had the United keeper Jordan Williamson grasping at thin air. The ball crashed off the underside of the crossbar and bounced down, before rebounding off the net-minder and over the line. It was given as an own goal but it surely belonged to Kealan.

The start that Barry Gray highlighted earlier was indeed horrendous. The Town won a corner kick after just 25 seconds but then when the ball was cleared up field the Point skipper Fra McCaffery barged into the United striker Paul McElroy with the referee Tony Clarke immediately pointing to the spot.

McElroy then dusted himself down before drilling low into the Warrenpoint net. Though keeper Conor Mitchell was so unlucky not to keep it out.

Less than two minutes were gone of the new season and they had suffered a crushing blow. So how would Warrenpoint respond?

They responded well, though as their manager said, it took a little time. Meanwhile David Jeffrey’s side could have gone two in front on 19 minutes, but McElroy’s snapshot fizzed inches past the Warrenpoint post.

The Town though had a few chances of their own. On 21 minutes McCaffrey fired inches wide while on 33 minutes eager-beaver striker Gregory Moorhouse was unlucky with a glancing header.

Then with halftime approaching Dillon created that stunning finish that squared matters.

If Ballymena sprang from the blocks quickly in the first half, Warrenpoint were even more emphatic in the second. Just 29 seconds after the break referee Clarke was pointing to the spot and awarding the Town a penalty.

It was in almost the identical place where Ballymena got their spotkick but this time as well as awarding the kick, Clarke red-carded Douglas Wilson for dragging back Luke Wade-Slater.

Anyway Kealan Dillon was the coolest man in the ground as he slammed the ball high into the net with Williamson helpless.

It was the winning goal and in fact after that score neither Warrenpoint nor Ballymena created a worthwhile scoring opportunity.

The Town didn’t need to, while 10-man United were out-manoeuvred by a slick home team. Colm Deasy looked a class act at right back, Steven Ball solid on the other side of defence while up front Gregory Moorhouse worked his socks off.

And of course there was Man of the Match Kealan Dillon. Barry Gray was loud in his praise of the wee midfielder, saying: “He has been superb for us since he came to the club. He probably doesn’t get the credit, or headlines, he deserves. But today his goal in the first half was brilliant. It came off the bar and hit the goal-keeper. It was a great hit and a great shot. Also his composure for the penalty was admirable. Lots of people would have panicked but he didn’t. He has an abundance of talent and today he showed that talent.”

It was an excellent start to the season and one which will give the side, manager Gray and the fans confidence and belief.

The Town bench is strong and the boss was quick to pay tribute to the substitutes. “Thomas Maguire came on to get his first 30 minutes of competitive football in a year and Stephen Dunne, who was unfortunate not to be in the starting eleven through injury, came on and replaced Daniel Byrne who is a big player for us. And both substitutes were faultless. Also there were other players on the bench who didn’t play but they will get their chances.”

Warrenpoint travel to Carrick tonight (Tuesday) and Barry Gary spoke of the game.

“Carrick is never easy at any stage. It’s a new Carrick team and a new Carrick manager. Nobody knows what to expect from them. However, it’s not about them, it’s about us.

In the past we’ve done relatively well against Carrick in the Lough Shore Arena and we will be going down there confident we can do well again. We got off the mark today while they were beaten so we’ll get the boys recovered and we will make no bones about it, we are targeting a win.”

While on Saturday Warrenpoint have a home game against Glenavon.

When asked if he had any new signings in mind, the Point boss said: “I don’t think we’re under any pressure to take anyone else in. But I would be lying if I said we weren’t looking.

“There’s always room for one more, as long as that player is better than what we have and he can add something to the squad. We are looking and we won’t stop looking until the window closes. But if we don’t do anything, we’re more than content with what we have.”