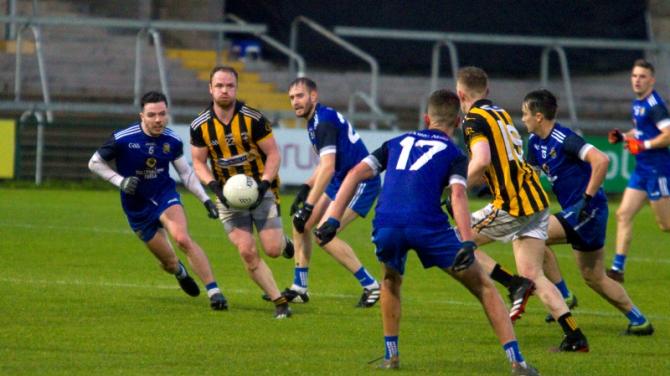 CROSSMAGLEN Seconds won their way through to the Armagh Junior Championship final (where they will meet Belleek) with a nerve-tingling single-point victory over a tough Derrynoose side.

At the Athletic Grounds on Saturday evening the match could have gone either way but normally when it’s down to fine margins, it extremely hard to beat the Cross.

And Saturday was no exception.

Their spokesman, the evergreen Rico Kelly who had a super game explained. “It was a brilliant win today but it was hard-earned. Maybe it was a game we would have lost last year - or the year before. But we have a new team with new players and we gave an all-round better effort.”

On his own performance he replied: “Hopefully in the next few weeks I’ll get a wee bit fitter for the final.”

On Johnny Hanratty, who when he came on with ten minutes left, gave his side a huge lift, Kelly said: “Johnny has lost a few pounds in the past few weeks. The big man is flying.”

It was a low-scoring opening 20 minutes with each side working the scoreboard man just twice. Derrynoose’s Davy McCreesh hit the first point of the game on six minutes with Colin O’Connor and Shane McConville then firing over for the Cross. But with the last kick before the water break the Noose’s top marksman Conor McNally pointed.

McNally added another on 23 minutes but six minutes later Rangers grabbed the game’s only major score. A quick Johnny McKeever freekick and there was Eoin Keenan finding space behind the Derrynoose defence before slamming a blistering close-range drive into the back of the net.

However, just before the halftime break Pearse Lennon reduced the deficit to just a single score.

Noose sprang from the traps on the restart and with just 35 seconds gone Mark Lennon pointed from way out on the left flank.

Meanwhile at the other end Colin O’Connor tested the Derrynoose keeper with a powerful 25-yard drive but Stephen McArdle was not found wanting and he dropped to make a fine save.

However, it would be ten minutes into the second half before the Cross would score again, then Eoin Keenan firing over from away out on the left wing.

Yet that score seemed to inspire Noose and they pointed three times without reply.

And it could have been worse as Oisin McNally fired over the bar when the goal was at his mercy. Pearse Lennon and Conor McNally pointed as Derrynoose went into the second water break two points ahead.

But Cross are rarely beaten. It’s in their DNA.

And they upped the tempo. Paul McKeown hit a fine score with Johnny McKeever equalising.

Eight minutes left and on comes a Crossmaglen legend. And with his first kick Johnny Hanratty hit a fabulous point.

The sure-footed McNally levelled on the next attack and the same player was unlucky as he forced his way through but his parting shot clipped the base of the Cross woodwork.

Then typical Cross. When the game is in the balance, they produce the goods.

Connor Savage latched onto a Hanratty pass to point and in the last kick of normal time Shane McConville put two points between the sides.

In the four minutes of time-added-on McNally pulled back a point. But the Cross were not to be denied and they kept possession until the referee Stephen Murray blew for full time.

Can Cross win the final against Belleek?

Rico Kelly was conservative as he answered: “All we can do is show up on the day and if we do our best, it’s all we can ask for.

“Everybody is flying and firing on all cylinders. Young boys such as Decky Stuttard and Ryan Duffy are leading by example. And we’re just following that example.