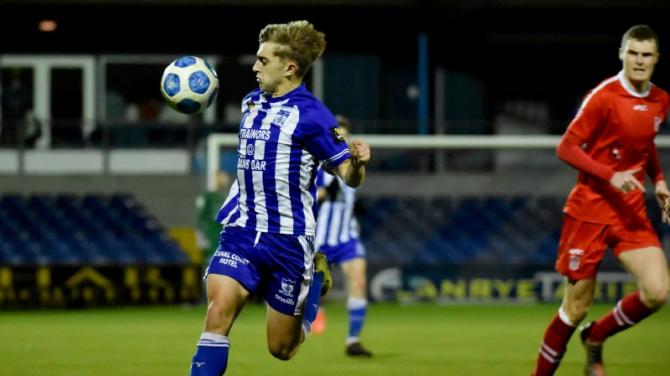 In front of a decent crowd the home side gave a below par performance and in truth the Castlederg team deserved their victory.

The most disappointing thing about the defeat was that, apart from the goal, City didn’t test the Derview keeper throughout the 90 minutes.

The Newry manager Darren Mullen agreed that his side didn’t deserve to win, saying: “It was a bad night. We didn’t start the game well and were really sloppy for the two goals. We did things we weren’t supposed to be doing.

“Before the game we told the players where the threats would be … what to do and what not to do. We told them not to be giving away set pieces. We said to watch the big fellow (centre-forward Benny Igiehon). He’s a lad you don’t want to get involved with in a tussle. We told the boys to play off him. Let him win balls and play for seconds. We didn’t do that either.

“We deserved to be 2-0 down and it could have been 3-0. We needed a reaction and got a bit of that towards the end of the first half.

“But in the second half, for all our play, we didn’t test their keeper. It’s disappointing. We needed to have something at the end of it.”

When asked why John McGovern, a goal-scoring forward, did most of his work in midfield, Darren replied: “John is very good at running at people. We wanted to get him more involved. “He wasn’t getting much joy up front so he dropped back a bit to get on the ball a wee bit more. And in fairness he did that. But players around him have to help him. He can’t do it all on his own.”

City got off to a terrible start. Just three minutes were gone when Dergview won a freekick way out on the right, just in front of the Newry dug-out. Kieran Farren took the kick, curling it into the box and there was the big striker Benny Igiehon rising unchallenged to head past Steven Maguire.

After that goal Newry huffed and puffed but created little and on 31 minutes the visitors doubled their tally. This time as Ryan McGivern challenged Igiehon, the striker seemed to foul the Newry central defender with the ball breaking to Cathal Farren who raced clear before beating Maguire with a fierce drive.

It was time for drastic action and indeed five minutes later City boss Mullen made an unusual double substitution, taking off both Decky Carville and Fra Brennan and replacing the duo with Jimmy Walker and Mark Hughes.

And on 43 minutes this move seemed to have worked. A long accurate Stephen Moan ball released James Teelan on the right with the Dergvew keeper Alan Buchanan charging off his line to cut out the pass. But the net-minder miskicked leaving the wee Newry winger with the simple task of firing into the empty net.

And the teams could have gone in at the break level, as almost right on the halftime whistle. Thomas Lockhart picked out John McGovern on the left but the latter’s cross was hacked clear by a Dergview defender.

In the second half Newry had most of the ball but created little. Scorer Teelan covered some ground as he worked feverishly but the wee man just couldn’t get past a tough-tackling (and often a late-tackling) Dergview defence.

In the final moments Newry did have a few scoring opportunities. Daniel Hughes found McGovern but his shot was blocked while the closest City came to netting came on 90 minutes when a superb, acrobatic Darren King overhead kick looked to be net-bound. But a defender cleared off the line.

Overall though Newry really didn’t deserve anything from the game and Darren Mullen was down-to-earth; and in his summing up he shouldered the blame.

“We’ll just have to take it on the chin. It’s something we need to fix and it’s up to me to try and fix it. I’m the manager. I take responsibility. I pick the team and put them out. It’s great when you are winning but when you’re not winning we need to show character and stand up.

“The good thing about it is that we have a game next Friday night – away to Ards, the league leaders. There’s no better game to fix things and put them right.

“We were a bit unlucky. Engine (Darren King) had a superb chance that was blocked on the line. We would have got a draw had that gone in. Although if we want to win the league, and with no disrespect, we have to be beating teams like Dergview.

“We didn’t do enough tonight and we’ll need to learn from it – and learn quickly. It’s up to me. I’ll watch the game back and see what we can do.

“It’s not going to be an overnight fix. It’s a long season and there will be twists and turns; but we need to stay in the mix.

“If we learn from tonight and go and beat Ards next Friday night we’ll see where that takes us. There’s plenty of football to be played yet. We’re disappointed but we’re not panicking.”