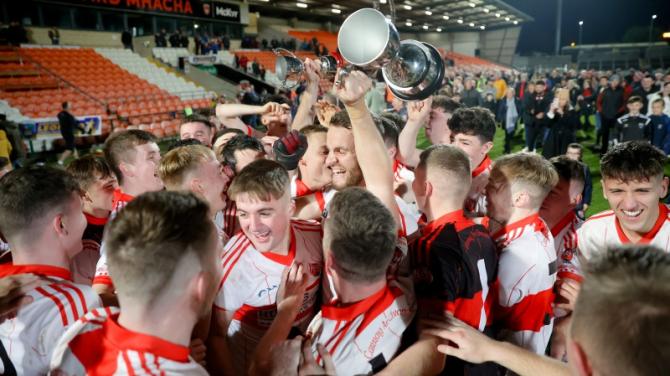 CARRICKCRUPPEN will be playing senior football next season after cracking performance to get past a talented Culloville on Sunday.

Cruppen had their homework done, they marked Culloville's key men out of the game and had the finishers at the other end of the pitch as well as a touch of luck for the all-important goal.

The athletic Oisin O'Hare did a brilliant job on marking Culloville's talisman Darren Rowland. He pestered Rowland, got a hand in, or was out in front of his marker. At times it wasn't tidy and he was fortunate to get away with picking up a black card, but without Rowland pulling the strings, Culloville didn't click.

Carrickcruppen manager Barry Flynn, who manages alongside Paul Cunningham, was delighted with the win and the prospect of playing senior football was as far away as ever only three seasons ago.

“We were in Division 2B and nearly floating about Junior and it was our own fault, we suffered badly as a club in terms of standards the players we are setting at senior level,” Flynn said.

“A lot of managers came in and tried to do what they could do, but players had a bad attitude. Then there was a crop of new boys, there is 33 men there and 24 of them boys are under 23 and they will only get better playing at a better standard.

“Playing 2B, with no disrespect to the clubs that are in it, we came through that with one defeat, and we will get better, and we had seven in the Armagh wider U20 group and we have got Blaine in the senior squad, and I am sure we have a few of those boys knocking on Armagh’s door soon, but they need to be playing at senior level.

“They have come through underage playing in Division One, so they have been playing the big clubs at underage and they are ready for it, but we will see in 12 months just how ready we are.

“I think over the course of this championship that we were the best team, and we got our rewards. I know people don’t think we were thinking like this, but we sat down with the players at the start of the year that we are here to be a good team and not in three or four years, even though we are young.

“We are here to be a good team now and we wanted to win the championship this year and we have done it.”

Played in Armagh's Athletic Grounds on Sunday Carrickcruppen led by five points at the break. They made their intentions clear with Eion Woods firing over the bar with only 12 seconds gone.

The Camlough side controlled the second quarter after an opening 15 minutes that suggested this game would go down to the wire.

Richard Keenan added another point to the Cruppen cause before Cathal Hatzer (mark) opened Culloville’ s account then Fergal Kieran put the Blues ahead after good link-up play between Shane Carragher and Fearghal Rowland.

The Blues packed numbers in defence, and they weren’t making the driving runs they had done in earlier rounds. Ryan Garvey had two attempts to score, with his second going over to put Culloville ahead with 13 minutes played but Blaine Hughes grabbed his first of four points with a converted 45’, which was earned after Loughran’s shot was deflected out. The sides were level (0-03 each) at the first water break, but it was in the second quarter where the Camlough men made hay.

Hughes converted his second point before Shane Carragher blazed his shot over, but Cathal O’Grady’s (mark) and another 45-metre converted free from the goalkeeper Hughes gave Cruppen a two-point lead.

The Camlough side were moving the ball about better with captain Stephen Loughran picking out passes but their goal had a struck of luck as Loughran’s long ball towards the square took a deceptive bounce, which wrong-footed the Culloville defence and left Tiernan Kelly one-on-one with goalkeeper Michael Nugent and the young forward coolly tucked his shot low into the corner for a great goal, which turned out to be the winning difference.

Colm Watters (0-08) replaced Sean McGeeney and the former Armagh player scored twice with his first two touches, both from frees.

The lively Man of the Match Woods replied with an opportunist point after Adam Matthews, who did a fantastic marking job on Dara Quinn, intercepted a Culloville kick-out and Loughran struck a super long-range point to give Cruppen a five-point lead at the interval.

The second half was six minutes old before Loughran registered the first point, Culloville were creating chances, but Cruppen hunted in packs and eventually the Blues found a way through with Watters (free) third point.

O’Hare was doing a great man-marking job on county man Niall Rowland, but the Camlough lad was given a ten-minute sin-bin after picking up a black card on 40 minutes.

It was up to Culloville to eat into Cruppen’s lead for the ten minutes they had an extra player.

Watters got the ball running with his fourth converted free and they kept pressing and picked up frees, with Watters fifth free leaving the goal the difference as the second water-break was called.

Cruppen were starting to get a bit ragged, and the break probably came at the good time for them, but Culloville have been strong finishers and they had the players to get something from this game.

But the Camlough men weren't finished and Eoin Woods fed Kelly who with little room squeezed over a great point.

Still it was all to play for and at the other end Culloville missed a glorious chance for the goal as Steven McCreesh’s cross flashed in front of goal needing only a touch and Ryan Garvey came so close but he failed to get his foot to the ball, for a certain goal.

Cruppen were relieved and they punished with another stunning point from Woods to go 1-11 to 0-09 ahead with 52 minutes played.

But Culloville’ s chances were dealt a blow when full-back Ruairi Garvey picked up a red card.

Four additional minutes was announced a minute after Woods fired over his third point as the title looked Cruppen’s to lose.

Fergal Rowland capped off a great performance with a point deep into additional time and Watters’ eighth converted free left a goal between the teams with four of the additional, minutes played.

Culloville had one last chance but the long ball towards the square was overturned by the busy Cruppen defence and the Camlough men had done enough.

Culloville have improved vastly under manager Kieran Hatzer and they have plenty of good young players and some of their elder players are as fit as ever, they won't be far away next season.

But the evening belonged to Cruppen, built on the back of U21 success only two seasons ago, they are a formidable side and they'll expect to stay around the senior grade over the next decade.

But first they have celebrations to enjoy and then Ulster to contend.