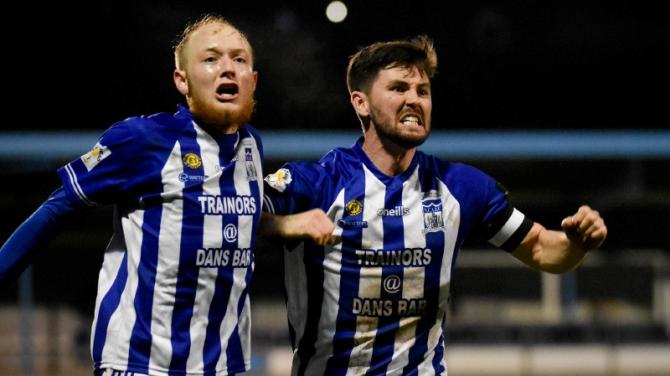 NEWRY City raced four points clear at the top of the Lough 41 Irish Championship table after a hard-won 2-0 victory over Ballinamallard United at the Showgrounds on Saturday afternoon.

It was a tremendous result as just a few months ago when the Mallards came to Newry they ended City’s six-match victorious run with a 3-0 victory.

And it must be said they were worth their win that September day as they out-played and outmuscled the home team. And in fact they are the only team to beat Newry this season by more than a single goal.

Saturday’s win was especially pleasing for City boss Darren Mullen as he was celebrating his 300th game in charge of Newry.

Darren recalled that previous game against Ballinamallard: When he was asked if there were any positives that day he was emphatic: “No. Nothing. Not a thing. I’m not going to sugar-coat it in any manner. We were poor all round.”

On Saturday he recalled that match. “It wasn’t like us. And we had to rectify it.

Then I was asked me how I would fix things when they were not going well.

“Quite simply, it’s hard work. A lot of credit must go to the players but the coaching staff deserve credit as well. And I don’t mean just me. There’s the two Damians (Hillen and McCorry), Gary (Boyle) and Mickey Keenan who work hard with the boys.

“We played well in the first half today but we came in at the break thinking we should have been a few more up. Though we had to be happy with a 1-0 lead. In the second half it was a matter of digging in.

“They put us under a wee bit of pressure. They went long with it as they had a couple of big physical players. But we dealt with that and they hadn’t too many chances. And they were there to be picked off on the counter.

“We knew there were going to be physical challenges. They are also a good football side and they can mix it up too. But we dealt with everything. Our back line was super and we did what we had to do in the midfield. We defended as a team and attacked as a team.

“This league could be won or lost in midfield and we have players such as Philly (Donnelly) and Jimmy (Walker) who can put their foot on the ball and break. They are excellent at that.

While Fra (Brenna) allows them to do so as he breaks up play and does the dirty work. He too deserves a lot of credit.

“Though I would have been happier if we had got that second goal a bit earlier in the game. We never do anything easy. Still it was a terrific win. And I don’t think anyone could argue with the result.”

City, who began without the injured Stephen Moan and John McGovern (who was on International duty), created the first scoring opportunity on six minutes when skipper Darren King cut the ball back to the lurking Philly Donnelly but the wee midfielder miskicked.

Two minutes later Jimmy Walker picked out Daniel Hughes with a great pass but Dingo had his shot blocked.

Still City were playing super stuff, especially Ryan McGivern who was back in the starting line-up after injury. The ex-Northern Ireland International was superb in the heart of defence while Philly Donnelly was busy as a bee in midfield. Also the all-action James Teelan was causing huge problems for the Mallards with his searing pace.

And it was the duo of Teelan and Donnelly that set up the opening goal. On 25 minutes Teelan cut in from the right flank and shot. His drive was blocked with Donnelly picking up the loose ball before cutting it back to Decky Carville who coolly side-footed into the net from 12 yards.

The first half almost totally belonged to Newry although on 38 minutes United’s Joshua McIlwaine did have a crack at the target … but Steven Maguire made a fine save to deny the Ballinamallard attacker.

On the restart the visitors upped the tempo, looking a lot more dangerous. And on 62 minutes it needed John Boyle to be at his best to bravely block a Reece Byrne drive. While BJ Banda was narrowly wide with a wicked low snapshot. Furthermore the same Banda also hit a cracking drive that needed an equally good Maguire save.

Meanwhile on 53 minutes Daniel Hughes was just millimetres away from intercepting a back-pass.

Also, on 67 minutes, there were loud Newry appeals for a red card as a Mallard man hacked down the goal-bound Hughes who would have been through on goal. The defender appeared to be the last man but the referee Steven Gregg kept the red card in his pocket.

As time ticked away Ballinamallard pressed forward relentlessly but the City defence was solid and uncompromising.

It seemed that lone Carville goal was going to settle the game but Newry grabbed a second score in the third minute of injury time.

Hughes slipped a ball down the right flank to Brian Healy and the 17-year-old substitute did brilliantly to scorch past several defenders before crossing. The Mallards scrambled clear but Jimmy Walker picked up the loose ball before slamming a wicked drive into the bottom corner.

The final whistle sounded immediately after the restart and Newry had pocketed three vital points.

They were vitally important points as two of Newry main title-challengers Ards and Loughgall both dropped three points … with City increasing their gap at the top from one to four points.

On next week’s match in Belfast, away to Knockbreda, who defeated former league leaders Ards on Saturday, Darren Mullen said: “It will be a difficult game. In this league there are absolutely no easy games. Not one. They will be looking to beat us and take a scalp.

“However, we’ll enjoy our win this weekend before looking ahead.”