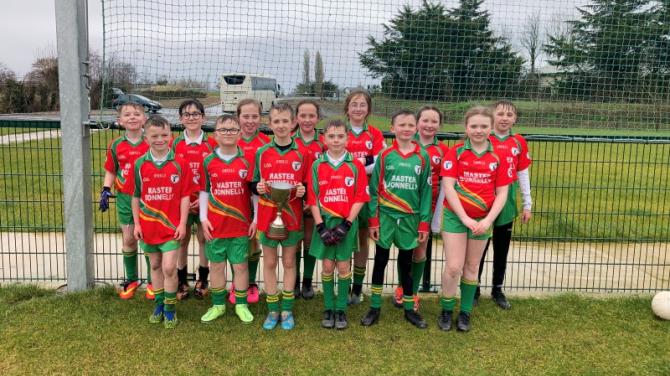 This tournament was organised by Cumann na mBunscol, Ard Mhacha.

All the boys and girls played extremely well, they all displayed excellent commitment and determination in each of the games.

After the preliminary rounds, St. Teresa’s successfully got through to the semi-final and played Carrickovaddy. This was a tense and exciting game, the skills showed by all the St. Teresa’s players enabled them to win and succeed to the final.

It was a thrilling final against the home side Maghery, who have won the cup consecutively for five years, but the Tullyherron All-Stars’ quality skills and sheer determination led them to victory, winning the final to become the Malachy Mc Geeney Champions 2022!

We would like to thank Mrs Sinead Mc Court, (Principal) Mr Conor Mc Cann and Mrs Jacqueline Gahan who mentored and coached the team before and during the tournament.

We would also like to extend our appreciation to Rita Robinson Principal of Maghery for hosting a very enjoyable tournament and providing refreshments.

What the players had to say after the game:

Harley Bann (Team Captain) “I was excited and a bit nervous going to this tournament because we hadn’t played in a Football Blitz for two years because of COVID.

I was a bit annoyed that we lost our first game to Maghery, but we put it down to nerves, but losing the first game helped us to improve for the next few games.

We were very determined in the other games because we didn’t want to lose again.

The weather was good until the final, when the rain came on heavily but Mr Mc Cann told us that the bad weather would suit us because we are warriors.

Lifting the Malachy Mc Geeney Cup was unreal, the best feeling in the world!

We can hold onto the cup by working hard, improving on tactics, marking up, no free spaces and by always listening to our coaches.”

Lia-Rose Crawley – “When we were going to the blitz, I felt nervous and excited because St. Teresa’s had never won the Malachy Mc Geeney Cup and Maghery had won for five years in a row and we were playing them in the first game. Also because of COVID we hadn’t got playing in any football blitzes for 2 years.

Elsie O’Hanlon – “When we lost in the first match, I tried not to let my confidence shake. I wanted us to prove ourselves worthy of this cup and that we had the skills to bring it home. We played so well in the final against Maghery as they were very confident because they had beaten us before but their guard may have been down and we won the game.”

Tyler Glass – “When we lost the first game I was a bit down but even more determined to win our next few games and bring home the cup. After the first game, we all improved because it made us realise what went wrong and we knew we could change that.”

Charlie Shields – “After we lost our first match, we won the rest of our matches and won the Malachy Mc Geeney Cup.”

Ciara Ward – “Our skills improved after the first game and we got more determined. Our goal keepers Charlie and Raymond made some great saves and everyone else played really well.”

Daniel Matthews – “Our team tactics helped us win and by listening to our teachers who coached us. We got to go to Mc Donald’s on the way home to celebrate our win.”

Ailise Connolly – “The thing that improved after the first game was that we lost all of our nerves and worked as a team.”

Raymond Lonergan – “I think our defence really improved after the first game, our midfielders were really good throughout the tournament and our confidence grew with every game.”

Rhys Cosgrave – “We played as a team, we passed the ball quickly, our positions worked really well and we will continue to work hard in all our football skills.”

Adam Mc Sherry – “I felt so happy to be at this tournament. The thrill of playing for a cup was amazing. I think by trying our hardest and being determined in every position, even the substitutes, the midfielders going to the wings and bringing the ball up to the forwards, while the defence stayed back helped us to win the game.”

Kerry Ward – “The best thing for me was when we won the final and that the teams that had been knocked out were cheering for us, which give us confidence.”

Dillon Drislane – “Well the best thing was definitely when we won the final! We had played well in the other games but were up against Maghery, the team who had beaten us in the first game, but we were confident and in the end, we came out on top.”