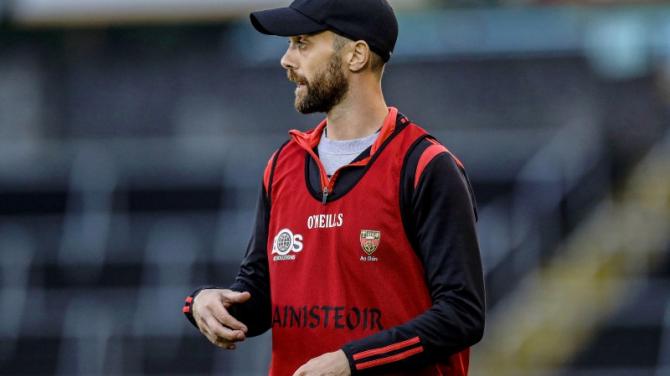 IT took Tyrone some time to settle, but once they found their way, they steered a steady course to victory and a place in the Ulster U20 Football Championship semi-finals.

After falling five points behind to a dominant Down side in the opening half, the Red Hands turned the game around, and were well worth their five points winning margin over the holders.

Five Ruairi Canavan points and three from Conor Cush added to Luke Donnelly’s penalty goal at Loughmacrory as the home side set up a last four clash with Donegal this weekend.

It was Down who displayed all the energy and drive in the opening stages, going ahead inside the opening minute through Ryan Mackey as they threw everything into attack, despite playing against the wind.

The Red Hands were under pressure at the back, but managed to turn the tide for Ruairi Canavan to finish off a counter-attack with a well taken point.

But as the visitors continued to press, they were able to find spaces and avoid tackles as they pushed for further scores, with midfielder Oran Murdock putting them back in front.

It was a difficult time for the Red Hands, and they needed some last gasp defending to prevent further damage, with Brian Conway, Steve Donaghy and Niall Devlin stepping in to avert the danger, and Michael Rafferty denying Aaron Cole with a well timed block.

The pressure was building, and it paid dividends for Conor Laverty’s side in the eleventh minute when they crafted a goal.

Midfielder Oran Murdock made ground along the left wing, cutting inside as he managed to get the better of a couple of defenders, and his cross was met by full forward Adam Crimmins, who punched to the net.

Crimmins followed up with a fisted point, once again taking advantage of the space afforded to the front men, and with the battle for breaking ball around the middle going in Down’s favour, it didn’t look good for the Red Hands, 1-3 to 0-1 behind at the end of the opening quarter.

But they got their challenge going with a couple of well worked scores. Michael McGleenan made a surging run to set up Canavan for a brilliantly executed long range point off the outside of his right boot.

Moments later, Seanie O’Donnell created the opening for Ciaran Daly to add another spectacular effort, and the outlook was already looking brighter for the home side.

Down rallied again for Oisin Savage to convert a free, but there were signs that Tyrone were succeeding in shoring up some of the gaps that had opened in the early stages.

They were also wining more possession around the middle, but failed to take advantage of a couple of positive raids, with the ball sailing just wide of the target from efforts by Canavan and O’Donnell.

McGleenan’s high fielding helped keep them on the offensive in the final ten minutes of the half, and he fetched to link with Ruairi McHugh and send Conor Cush in for a point.

And in the 25th minute Tyrone were awarded a penalty as Canavan was hauled down as he went for goal. Luke Donnelly stepped up to slot the kick to the net, via a post, and the sides were level.

Down almost responded instantly with a goal, with Oran Murdock combining with Savage to send Crimmins through, but he was denied by a fine save from Stephen McMenamin, who deflected the shot around a post for a ’45, which goalkeeper Aaron Murdock converted.

Murdock added a long range free to open out a two points lead, but Ciaran Bogue set up a point for Donnelly in stoppage time to trim the deficit back to a single point, Down ahead by 1-6 to 1-5 at the interval.

The second half saw a transformed Tyrone side take the field, much more intense in their approach and sharp in the tackle, allowing their opponents little time and space on the ball and winning the battle for broken possession around the middle.

Straight from the throw-in, Ruairi McHugh won possession and drove through to set up a point for Conor Cush, and the Mourne lads knew they were in a different type of contest as they dropped players back inside their own half to help deal with the pressure.

Conor Bogue sent over a terrific point to give his side the lead for the first time in the 35th minute, and it was an advantage they never lost.

A brilliant long range point from McGleenan was followed by a well worked move which was finished in style by Daly as Tyrone made it four points on the spin, and now looked supremely confident and in control of the contest.

With Niall Devlin, Michael Rafferty and James Donaghy pressing forward from the back, it was a tough time for the Mourne county as they found themselves defending desperately for long spells.

But towards the end of the third quarter, they managed to break the Red Hand momentum, and pushed forward themselves, with Oisin Savage sending over a couple of scores to narrow the gap to a single point.

But that was as good as it got for the Down side, for they failed to score in the final quarter, although they did come close to adding a second goal.

Substitute Paudie Clancy crossed from the right, and just as he was about to connect with the ball, Sean Og McCusker lost his footing and a golden opportunity was lost.

It was a let-off for the Red Hands, but they used it to the best effect as they went back on the attack, hitting the final four points of the game to seal a convincing win.

Cush squeezed over a delightful effort from a tight angle, and Canavan drove over three frees, two of them from the 45 yard line into the wind, to make it a five points margin and a place in the last four.