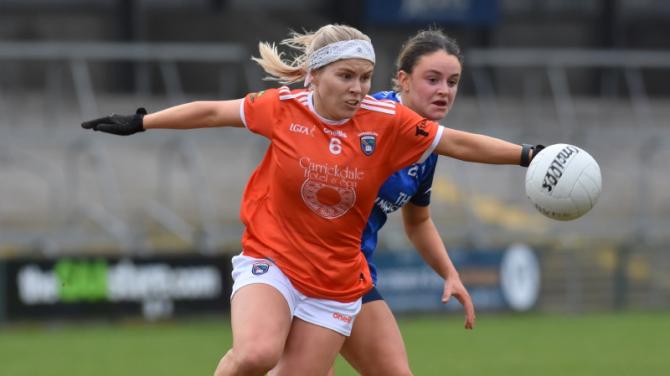 ARMAGH ladies are looking forward to their first appearance at Croke Park in almost a decade this weekend as they aim to secure a return to NFL Division One football after a five-year absence, writes Richard Bullick.

The Orchard crew will tackle Kerry in Sunday’s second division decider (2pm, TG4) with the welcome chance to clinch some early season silverware and, even more importantly, promotion back to the top flight.

As well as a number of clubs running busses to the match, Translink are putting on a special train to Dublin to accommodate Armagh followers who don’t want to miss a long overdue opportunity to see the Ulster champions play at Croke Park.

This will be the Orchard outfit’s first trip to headquarters since the 2012 All-Ireland Intermediate decider defeat of Waterford and only the third time in their history that Armagh have graced gaelic football’s most famous field.

Just five of the present squad have played there before, including the iconic Caroline O’Hanlon, who is the sole survivor from Armagh’s Junior final victory of 2005 and the Orchard’s only Senior showpiece appearance against Cork 12 months later.

The 37-year-old legend missed the demolition of Laois in the semis due to netball commitments but should be back for the final providing she comes through Manchester Thunder’s British SuperLeague game at teatime on Saturday unscathed.

The other remaining quartet from 2012 are inspirational skipper Kelly Mallon, who has yet to feature for Armagh this season due to injury, her Harps club captain Fionnuala McKenna and Lissummon sisters Sarah and Niamh Marley.

Those who are set to tread the hallowed turf for the first time in their Orchard careers include acting captain Aimee Mackin, who has established herself as one of the country’s top players with three All Stars and an All-Ireland Player of the Year award to her name.

The prolific forward’s sibling Blaithin Mackin and their fellow 2020 All-Star, Clann Eireann full back Clodagh McCambridge, are in their seventh and eighth seasons respectively in the orange jersey so richly deserve this honour too.

It has been an even longer wait for Dromintee dynamo Aoife McCoy and Crossmaglen’s Lauren McConville, both of whom have been Armagh regulars since the start of the 2014 season, while Catherine Marley joined the county panel at the same time.

With some 90 appearances for her county under her belt, McCoy has played more Armagh matches than any other female footballer in history without having had the opportunity to play at Croke Park up until now.

Armagh have fallen one win short of reaching Croker in All Ireland Senior Championship campaigns four times in the past eight seasons but booked their ticket to next month’s league decider by obliterating Laois in the recent semi-final in Drogheda.

That match came just two days after the 25th anniversary of Jim McConville captaining Crossmaglen to their first All -Ireland club title triumph at Croke Park on St Patrick’s Day 1997 and now his eldest daughter Lauren can look forward to playing there herself.

There’s a wonderful photo of toddler Lauren in dad Jim’s arms as he holds the trophy that special day a quarter of a century ago and she was there too when famous uncle Oisin McConville won Player of the Match in Armagh’s historic All Ireland final victory of 2002.

More recently, Lauren’s cousins Oisin and Rian O’Neill and James Morgan have all worn the orange jersey of Armagh at Croke Park and now last November’s ladies football All Star nominee is about to emulate them with her younger brother Cian hoping to follow suit soon.

Talking of family footsteps, Catherine Marley will be following her dad Noel and three older sisters Caoimhe – who played in the All Ireland Junior and Senior finals in the noughties – Sarah and Niamh when she takes to the field for Armagh against Kerry.

It will be a proud day for the players and their families but, with so much at stake in footballing terms, the team isn’t dwelling too much in advance on the revered venue but are fully focused on getting the win which would really make memories of this occasion special.