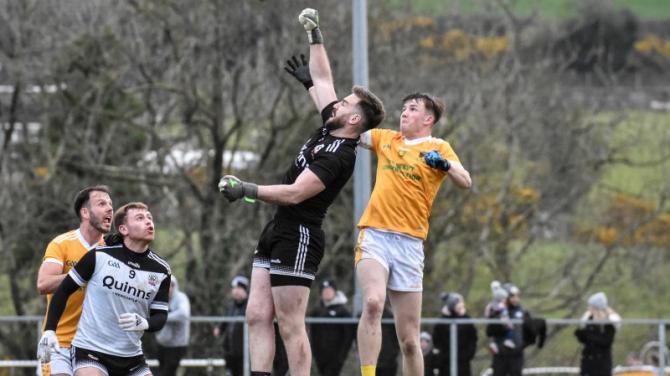 CLONDUFF got one over their neighbours after a thrilling finish against Kilcoo.

It was Kilcoo's first home game since their magnificent All-Ireland win and a massive crowd turned out to watch Thursday's Down All-County League clash.

Both sides were missing players but it was the young lads that stood up and were counted.

Kilcoo thought they had stole a late winner when Miceal Rooney started and finished the move involving a stunning pass from Sean Og McCusker into the net.

Normal time was up and the Magpies had gone two points in front but Clonduff had enough time to attack and when Conor Brown floated his pass into the square it was intended for Eamon Brown to punch into the net, but both Eamon and Kilcoo keeper Niall Kane contested and the ball fell behind them both into the net. It was a bizzare winning goal but one the Yellas were glad to avail of. And you can't say they weren't worthy.

Clonduff's tactics were simple, get the ball to Charlie Carr to pick out passes to Eamon Brown who called mark and then converted. He done that on five occasions and Brown was impressive throughout. Kilcoo tried dropping balls on top of Chrissy Rooney and while he was eager and able, he was outnumbered by the Clonduff defence and got little joy. But it's a work in progress.

Kilcoo opened the scoring after Conor Laverty laid off to the overlapping Eugene Branagan and he sliced over from an acute angle. Eamon Brown replied with his only score from play after a great run from Dan Rafferty, while two Paul Devlin points edged the Magpies ahead.

It was cagey enough for the first quarter but Clonduff took the lead for the first time on 21 minutes after a 35-metre mark from Eamon Brown and a lovely curled point from Rafferty and another from Conall Brown gave the Yellas a three point lead. That gap was cut to a point before the break after Miceal Rooney sold a clever dummy before splitting the posts and then Devlin converted his mark, which was moved up by the referee.

Patrick Cowan picked off a fine point at the start of the second half to increase Clonduff's lead but at the other end goalkeeper Mark Devlin pulled off a great save to deny substitute Ryan Johnston. Niall Kane converted the resultant 45'.

The game opened up somewhat and that seemed to suit Clonduff as Brown caught, raised his hand and stroked over. Time and again. Not all easy kicks either.

Dairmaid McEvoy replied with a neat point after Ryan Johnston spotted his run and with a minute of normal time remaining Clonduff led by a point.

But alas there was more drama as Rooney's goal put Kilcoo back in the driving seat before Conor Brown's deceptive long ball won the game.

It was Conleith Gilligan's first home game in charge of the Magpies since stepping up to replace Mickey Moran and he admitted it felt different but he was happy with some of his younger players.

“It is a wee bit strange that Mickey is not about and we are still in contact, I am delighted for Mickey, he got everything he wanted and he will be 70 at the end of the month and he deserves time away more than anybody I suppose,” Gilligan said.

“It will take us a few weeks to get everything back on track. There is three or four young boys there that are chomping to get in and they equipped themselves really well. Diarmuid McAvoy, Macdarragh Hynes, Cullum Rodgers and players like that have just come in and them boys need time to acclimatise to the senior league.

“It looked like a game that we were goig to lose and then we got the goal and looked like we were going to win and then the high ball goes into to the net at the end and that is just the topsy-turvy nature of these games with your neighbours. We have just come out of the wrong side of a point on this occasion.”

Of course for Kilcoo it is championship or nothing and while Gilligan knows that no less than silverware will do, he accepts there are plenty hoping to stop the Magpies continued success.

“That is exactly it and that is what it has to be, every year it gets harder and when you win a wee bit, the more it gets harder again, the standard of every team around you rises to try and match what you have done and it is no different here tonight,” said Gilligan.

“Clonduff was missing a good few players as well and some of the young boys they brought in where outstanding and they will look at this as a real positive as well.”