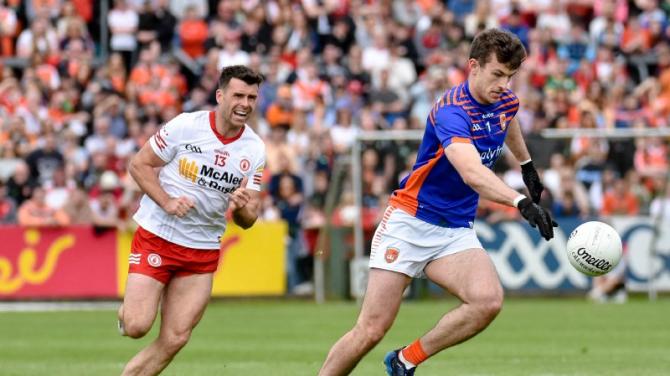 ETHAN Rafferty delivered the fly-keeper performance that was intended since the position was dreamed up by Armagh manager Kieran McGeeney and his team.

On Sunday, the experiment worked a treat and against rivals Tyrone made it even more the sweeter.

“That's the third time this year,” Ethan reminded us.

And he was quite rightly delighted with the win and he hopes there is more to come from his team, especially with Donegal next in line.

“That’s the third time this year, it is big win and I am delighted with it,” Rafferty said.

“It has been a long six weeks. We didn’t do ourselves justice and we were poor against Donegal. A big win like that there with such a big crowd in, it was class and children clapping and roaring.

“It was brilliant. Them things can kick-start a season. At the end of the day, it is still 70 minutes, 70 minutes juts gone and 70 minutes next week. We will chill out and do our recovery and we will see what the draw pulls up. It will be completely irrelevant we will focus on ourselves and hopefully we will come through it anyway.”

“You have to give Ethan huge amount of credit and for Kieran to place the trust in him.

“But for Ethan who is a fantastic midfielder, forward and full-forward and a quality footballer. It is the most high-pressured position in the game.

“Sometimes I stand behind the goals watching my forwards defend kick-outs and it is like a puzzle looking at it sometimes the way guys are moving and fellas are following and switching. It is the highest pressured position on the pitch and for a fella on his rookie year to take on that role being asked by the management and Blaine [Hughes] is pushing him really hard in the background. He kicked two of the scores of the game and again that really got the Armagh crowd going.”

Rafferty admitted that coming back from injury his focus wasn't exactly on getting the number one jersey but after a bit of debate with Geezer he thought he would give it a try.

“There was a right bit of debating, because it was tough enough decision because I was coming back after my cruciate and I got back after seven months I was delighted how a did with my rehab and recovery but it was hard getting back in,” Rafferty said.

“Kieran [McGeeney] came and said to me to give this a go and see what it is like. I was toing and froing but I am happy enough to give it a go. If it means the team is one or two percent better or if we are chasing games that I can come in and do that. I am happy enough to maybe see us over the line but it can have it slippery days too and like today I slipped on my hole. It goes in swings and roundabouts.

“It was going well in training, so I was happy enough to give it a trial and have a go at it.

Obviously, it can work, it is good at transition maybe getting out of defence quick. I have been training at taking kick-outs and some went over the line today. So, I need to keep in touch with them so not too bad.”

The Grange player has played in midfield and among the forward lines so it was no surprise he was keen to shoot and pick off two points, but he warned not to be expecting him to score from play too often.

“It is alright doing that if you are a midfielder but they are a little more on your case as a keeper. I am delighted they went over, when you get inside and on top of that D it is just bread and butter.

“Don’t be expecting that too much. I would be happy enough with a clean sheet for the rest of the year if I don’t score.”

And the former Minor and U21 star said he was happy to experience the scenes at after the final whistle in the Athletic Grounds, where 16,292 fans attended the game.

“It was great, I never obviously experienced anything like that there. I was delighted and I see a few members of my family and I got chatting to my mum after,” Rafferty said.

“It is great because they would have been gutted as we were in Ballybofey, so I am delighted we could do that for them and keep the season going. We don’t want to be sitting behind our hands after June and I am delighted we have another week in the championship and we will sit down and have a look at it.”