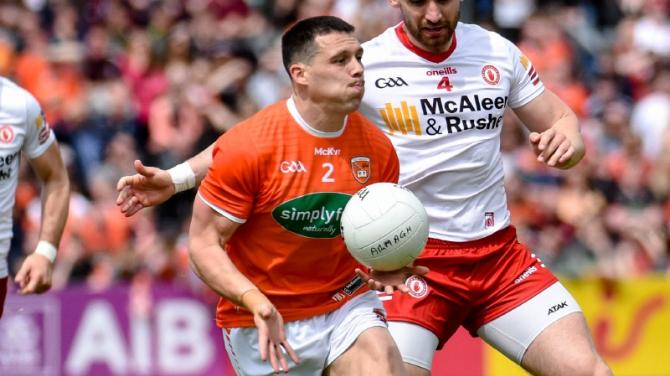 Armagh go into Sundays game looking for their first championship win over Galway.

The teams met in the first year of the Qualifiers in 2001, Galway grabbed the winning point with the last kick of the game. This spelled the end of Brian Canavan and Brian McAlinden at the helm.

In 2013 Galway were victorious again, this time in Salthill and I remember Aaron Kernan telling me after that match that he was prepared to be part of a team that had the learn the hard lessons of defeat if it meant the younger players would learn and grow making the team better.

In 2015 Galway dumped Armagh out of the early stage of the Qualifiers at the Athletic Grounds with a 1-12 to 0-12 win, with Comer bagging the important goal.

There’s been some memorable clashes between the two sides in the National League.

In a wet Tuam, it was Galway to who won in 2014. In 2016 Stefan Campbell kicked 1-09 but Galway came from seven points down to score the equaliser in the seventh minute of additional time. That point effectively relegated Armagh to Division Three with six league points. Meath, Derry and Fermanagh were also on six points but Armagh dropped due to results on head-to-head games.

Comer is a fantastic footballer. Strong, powerful, yet silky at making space for himself and he can pick out a fine score. His toe-taps are unorthodox but he makes huge strides with his run and if allowed much time on the ball close to goal, he will do damage. Comer has been content to be more of a provider of scores this year but that could change in Croke Park.

James Morgan is likely to get the nod ahead of Aidan Forker to mark the Galway talisman. Not much can has got past Morgan this season, his tackling has been tidy and his runs up the field means Comer has to watch him too. Morgan is on top of his game and Armagh needs another massive performance from him.

Paul Conroy is a box-to-box midfielder who is keen to score. He has impressed this year and been among the pick of midfielders. Quick and good in the air. He can pick pass but taking on players comes as second nature and that’s why Crealy can do a job on him. The Maghery man has the legs and pace to stick with Conroy and Crealy’ s tackling and dispossessing skills have been vital for Armagh’s turnovers this season. Crealy has been winning competitive kick-outs too and if the Maghery lad is on form then Armagh have a great chance of success.

Galway captain Sean Kelly may relish the role of curbing Rian O’Neill’s influence but Corifin All-Ireland winning captain Liam Silke is expected to pick up the Crossmaglen lad. Silke has plenty of big game experience and he knows how to defend in Croke Park and how to upset a marquee forward.

Of course, O’Neill won’t be hanging around the edge of the square, which can suit Silke too as he can bomb forward and assist the Galway attack. Rian was fantastic against Tyrone and exceptional in the recent win against Galway. He enjoyed Croke Park in the win over Dublin earlier this season and if allowed to, he can excel again. Galway will try to stop him but Rian is in the form of his life and getting better and if he clicks on Sunday then Armagh have a great opportunity of reaching the last four.

AS well as the aforementioned Comer, Conroy and Silke and Kelly, Rob Finnerty is a player that covers a lot of ground - forward and he’ll take the game to Armagh. He likes to score and Stefan Campbell will probably pick him on different occasions.

Cillian McDaid is a lively footballer who is quick and likes to counter-attack. Spent time Down Under playing Aussie Rules but his return has been a massive boost to Galway. If he is allowed to get much time on the ball, he could hurt Armagh.

Shane Walsh can be handful in the forwards. A steady free-taker, he can be the man that strings passes together and makes things happen for Galway. If Armagh can keep him quiet, they’ll be doing something right.

Ethan Rafferty: A goalkeeper that gives Armagh an extra full-back. He possesses a booming kick beyond the 45, which can give Armagh a superb attacking platform. Strong in the air too. It can be risky when outfield but Rafferty could start outfield and play a big role.

Jarly Og Burns: A talented player that has improved in this Armagh team and a vital cog in the wheel. Starting at half-back means little, as Burns’ timing has been excellent this season at popping up with scores or making last ditch tackles. Rarely isolated when defending and Armagh will try not allowing that to happen.

Stefan Campbell: The Soupy the fans love is back. Playing with his head up, he attacks with confidence and tracks back. His positional awareness, shielding opponents finding gaps has improved and the Clan na Gael lad has been magnificent this championship.

Rian O’Neill: He’s only starting his inter-county footballing journey and it looks exciting already. The class of how he strokes scores over, the bravery and execution of taking players on and beating them is matched by his work-rate and willingness to defend when needed.

Against Tyrone and Donegal, he won balls in the air near the Orchard goal-line. Armagh fans have watched Rian’s progress from Crossmaglen to Armagh and it has been the worth the wait.

He is a star and while he’ll thrive on playing on the big stage, too high of the expectations shouldn’t be placed on his young shoulders.

That said, he is the joint captain and leads from the front.