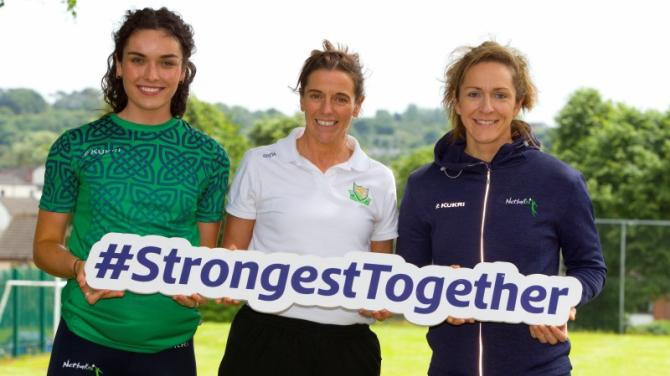 SACRED Heart Grammar’s Head of PE Bronagh McAfee has hailed sporty past pupils Caroline O’Hanlon and Frances Keenan as ‘wonderful role models’ after the pair paid a visit to their alma mater ahead of competing at this summer’s Commonwealth Games, writes Richard Bullick.

Official flag-bearer for Team NI at the opening ceremony of Gold Coast 2018, 37-year-old Bessbrook sportswoman O’Hanlon will captain Northern Ireland’s netballers in Birmingham next month at what will be her third Commonwealth Games.

Having watched O’Hanlon in action at Glasgow 2014 as a star-struck 14-year-old on a school trip with Sacred Heart, rising star Keenan from Cullyhanna will have the honour of being the world-class centre’s team-mate on the big stage this time round.

The pair were welcomed back to Sacred Heart last Friday by Mrs McAfee, who captained O’Hanlon in the early years of her long international career and is now head coach of the Northern Ireland Under 17 team, and met some of the school’s youngest netballers.

“I feel fortunate that we have past pupils of that calibre coming into school as wonderful role models who can inspire our young girls of today to dream big, work hard and achieve things they can be proud of, not just in sport but in all aspects of their lives,” said McAfee.

“Along with their sporting prowess, Caroline is a GP here in Newry and Frances is about to graduate in Finance from Queen’s, so they’re high achievers academically whose studies didn’t suffer because of the exceptional commitment they put into their netball and gaelic.”

“They’re positive proof that you can have the best of both worlds and I’m actually a firm believer that the qualities gained and honed through sport, such as a good work ethic, commitment and time management serve you well in life more generally.

“Sport promotes a healthy lifestyle and can nurture positive body image. Having a busy schedule requires focus and discipline and there are other benefits which come from being part of a team including confidence, friendships and dealing with ups and downs.

“I’ve actually played NI Premier League netball against Frances, but hadn’t really met her properly until now and what struck me is how humble she is in spite of coming back into school as a former Head Girl who is about to compete at a Commonwealth Games.

“She has done extremely well to make the squad, and how she has followed in Caroline’s footsteps after watching her compete at Glasgow 2014 is not just a heart-warming personal story but also illustrates the power of role models.

“I remember Caroline coming into the Northern Ireland senior squad as a schoolgirl almost 20 years ago.  She was unassuming and quiet initially, but through the years she has developed into a superstar of the sport and is now her country’s most capped player.

“It was a thrill watching her winning another SuperLeague title with Manchester Thunder recently and the fact those matches can be watched on Sky Sports TV or Youtube is clearly captivating girls here including some of my budding netballers here in school.

“Wearing my other hat as NI U17 coach, it’s great for these promising players to see Caroline and several other Warriors stars playing professionally across the water, which proves that netballers from this country can make it if they’re good enough and work hard.

“In the school context though, we provide a range of sporting opportunities, and although my own background may be netball, the main thing is encouraging girls to try things and find something they can get lifelong enjoyment from,” she enthused.

As someone who won the NI Premier League title with Lisburn-based Larkfield under O’Hanlon’s captaincy just before the pandemic at the age of 45 and is currently player-coach at Portadown, the evergreen McAfee is herself a positive sporting role model.

“Sacred Heart has a proud netball background thanks to the work of my predecessor Mrs (Siobhan) McCaffery, who did a great job over so many years including identifying and developing future internationals in Caroline and Frances.

She won’t be bringing a big group of teenage girls this time but Siobhan McCaffery is looking forward to being in Birmingham to cheer on O’Hanlon and Keenan, who both hold her in the highest esteem and that admiration is mutual.

“It’s hard to believe that it is eight years since the Sacred Heart netballers went on tour to Glasgow to see Caroline play in the Commonwealth Games and now Frances has morphed from being an overawed enthusiastic supporter to fellow squad member!” says Siobhan.

“Despite achieving so much in her sporting career, humility has always been a hallmark of Caroline’s character.  In spite of her busy schedule, she finds the time to motivate, encourage and mentor up-and-coming players and I know Frances has benefited from this.

“Caroline and Frances share many of the same attributes as players and perform with grace and complete athleticism.  Honestly, it was such a privilege to coach them during their time at Sacred Heart.  The way they play the game of netball is like poetry in motion.

“They bring intelligence and creativity to the court which gives them the edge over opponents, while at the same time they are sublime team players.  It will be a complete pleasure watching them compete against the best teams in the world in the coming weeks.

“To have two former Sacred Heart pupils playing netball in the Commonwealth Games is something the school can take great pride in and it’s hard to imagine any better role models for young girls and women in any sport than Caroline and Frances,” she enthused.

Living up to their Warriors moniker, the NI netball team have repeatedly punched above their weight at international level over the past decade in spite of very limited resources with the players often finding themselves significantly out of pocket playing for their country.

With the Commonwealth Games followed by a qualifying tournament in October for next summer’s World Cup in South Africa, the Warriors are hoping to attract commercial backing which could help the team’s preparations and level the metaphorical field a little.

Any companies interested in becoming backers of the Warriors, with options including sponsorship of specific players like local stars O’Hanlon and Keenan, who would be outstanding ambassadors for any organisation, should contact 07547 484312.