JAMIE: LIVING IN THE MOMENT 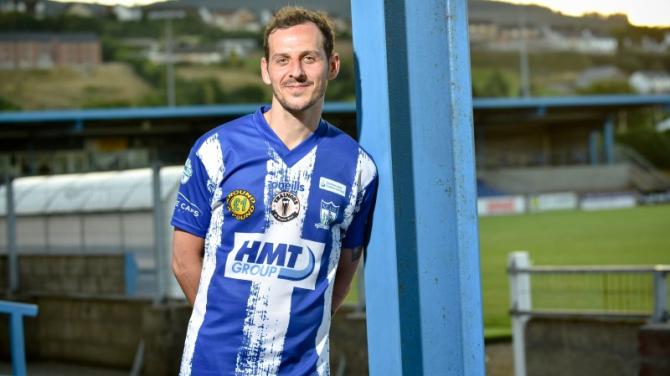 NEWRY City’s latest signing Jamie Clarke is looking to forward to making his debut in front of the home supporters and of course the Linfield base on Sunday.

Clarke, some people think his first name is mercurial because it has been prefixed in endless reports for his playing style with Crossmaglen and Armagh GAA over the years. Jamie is his own man and is still big box office news.

When the club announced his signing on Friday evening, the clubs social media response was off the scale.

When I arrived at Carrick, Jamie was just finished speaking to Irish News journalist Brendan Crossan. He spotted photographer Brendan Monaghan and said: “Well, did we break the internet?”

He knows the craic and was having a laugh, but it would be wrong to suggest Clarke’s signing is merely to enhance Newry’s marketing position.

There is probably not been a GAA footballer scrutinised for opting to go his own way in life as much as Jamie. He left Armagh and Crossmaglen on different occasions and he was unfairly accused of letting the teams down. Times have changed, thankfully so have attitudes, but a magician on the pitch, he didn’t want to be caged off it.

He spent last year working in Paris, but he has been back playing for Cross Rangers for this past five months, the option to link up with Newry City was on the cards and the opportunity to play in the Premiership was too good to turn down.

“It was something that I have always wanted to do from an early age, I played for Dundalk at U18 and then it was a case of signing an U21 contract, which meant no gaelic, so that was in the mix,” said Clarke.

“It is well documented that I played in New York in the Cosmopolitans League and that was a good level and there was a lot of feeder clubs to MLS. I have always loved it; it is a technical game and more expressive as well. It is a new challenge and Darren [Mullen] has given me the opportunity and I am all too pleased to give it a rattle.”

Linfield will be expected to bring around 4000 fans and Newry might attract a few more people to see Clarke in action. The Crossmaglen man sat out Saturday’s league opener at Carrick due to international clearance paperwork not being ready. But he says he is impressed with the talent in the Newry squad and feels that City should have loftier ambitions than many people’s expectations.

“Obviously today we played Carrick and I think most people hold the position that we could be in the similar position in the league,” Clarke said.

“From my experience the players are brilliant, very technical and can pass the ball around and we will be looking to give the League a rattle and not just fight relegation. It is one of these things that week after week the lads will grow in confidence. Everyone has been very welcoming so far; the fans have been brilliant and Darren has been great as well. He has imbedded me in comfortably enough.”

Clarke made headlines when he helped Cartwheel United to the AOH Cup in the Carnbane League. Like in gaelic, Clarke is a player that makes things happen. He knows where the goals are, can thread a pass and see moves before his opponent.

And soccer has been part of family life. His older brother Cormac was magnificent for Cartwheel in the Carnbane League, while younger sister Alex has played international youth level for Northern Ireland.

“It is one of those things, you grow up and I suppose Cross it is synonymous with gaelic football, but with our family it is just another interest we have,” Clarke said.

“A lot of people are into rugby, hurling and different sports and for us soccer is something that we love.

“I think there is an aspect with the crossover from gaelic that there is that steeliness and toughness that a gaelic player can bring, but you do have to have the technical ability to play and an understanding of where you are supposed to be and have a good touch.”

The pandemic cut Clarke’s fashion business plans short but he sold it before working with in the coffee industry in Paris, which he loved.

But he’s back on Irish soil and enjoying playing for Crossmaglen Rangers under manager Stephen Kernan.