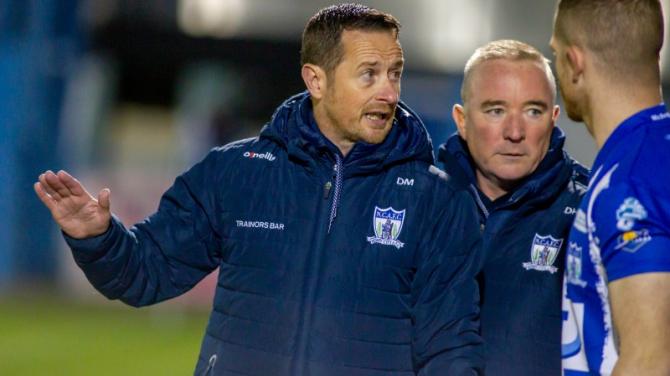 Lorcan Forde's second half goal was enough to see off Dungannon Swifts in what can be considered a six-pointer.

“We knew before the game that it was a good opportunity to get a wee bit of a gap and push ourselves on up the table,” said Mullen.

“We didn't play overly well in the first half to be honest it was scrappy enough, we had a lot of the play but we were giving the ball away too easily.

“So we just showed a bit more composure in the second half and we were the better side and deserved to win.”

Both sides had their chances in a scoreless first half with Joe McCready firing straight at keeper Steven Maguire early on while Newry could point to a couple of Daniel Hughes efforts.

The Swifts also came close when Ben Cushnie saw a header cleared off the line, with Maguire also denying McCready later in the half.

It was a similar pattern after the break with Hughes testing Declan Dunne twice and Maguire dealing with another McCready effort.

The deadlock was broken just after the hour when James Teelan cut the ball back from the right for Lorcan Forde to direct his finish beyond Dunne from the edge of the six-yard box.

Dungannon chased the equaliser as time ticked down, but James Convie saw his effort palmed away while Michael O'Connor fired the wrong side of an upright.

Newry currently sit eighth in the Dankse Bank Premiership table, a fine position, but the City boss acknowledged that tougher tests lie ahead and he isn't looking at the table just yet.

“Sitting eighth at the minute, it is early days but it was very important that we got points on the board at this stage of the season.,” Mullen said.

“We know how difficult it is to pick up points in this league and obviously we are away to Coleraine, away to Cliftonville and at home to Larne, you are playing three out of the top six teams in the next games and they will be difficult.

“But we have been playing well this season, even when we haven't been winning we have stuck to how we play and if we keep doing that then we will get our rewards and that is what happened on Friday night.”

Newry head to Coleraine on Friday night, with confidence high. There'll be plenty in Dromintee keeping an eye out on the game too as if Jamie Clarke plays on Friday night he will be ruled out of Sunday's Championship clash by Crossmaglen's self-imposed seven day rule.

“We will go to Coleraine full of confidence. The lads are buzzing, there is a really good feel about the club at the minute, it is a very good squad and it has become difficult to get into the squad,” said Mullen.

“Decky Carville was out injured, Donal Rocks is coming back from his suspension and other players we signed are coming back to fitness. There is strong competition for places and they are pushing each other on because if they don't play well then there is somebody going to take their place.

“Coleraine are a good team, they started the season well, although they were beaten on Saturday, it will be tough but we have gone there before and beat them. So we will do our homework and get ourselves ready and try and win the game.

JOHN McGovern has been ruled out of action for at least ten weeks, meaning he will miss much of Newry's season as well as the upcoming Northern Ireland U21 games.

It is a bitter blow for the Ballyholland native, who felt a groin tear in training and Newry boss Mullen said he is gutted for the lad.

“We got an MRI done and we are waiting to see how long he will be out for. It will be ten weeks anyway, it is a pity for the lad because he was due to go with the U21 N Ireland squad too,” Mullen said.

“He started the season well and has showed he is well fit to play at this level of football and we are all disappointed for him.

“But the sort of lad John is, he will come back stronger and he is very determined and I am sure he will be busting to get back whenever he is fit and able.”